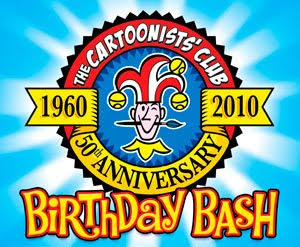 The Cartoonists' Club of Great Britain is 50 years old on Thursday. We celebrated at the weekend with a party, lots of food and drink, and a very big cake.

It took place in the pub off London's Fleet Street where it all began (well, actually a pub which stands on the site of the pub where it all began, but that doesn't sound quite as good!) on April Fool’s Day, appropriately for cartoonists, 1960. 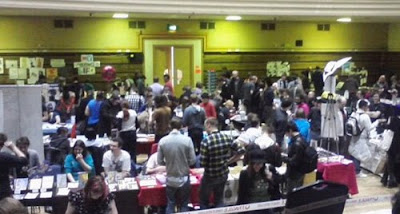 I made a cartoony weekend of it, meeting up with fellow cartoonists to attend the UK Web and Mini Comix Thing, above, where I spent much more money than planned, as well as the brilliant Ronald Searle at 90 exhibition at the Cartoon Museum. 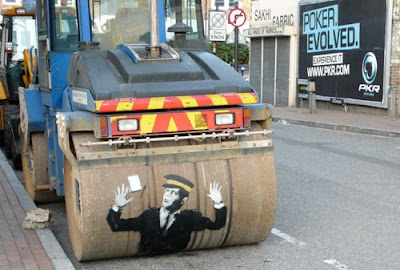 On Friday I also checked out the smaller Searle show at the Chris Beetles Gallery and went to see Exit Through the Gift Shop, the excellent film by Banksy, the street artist and, some would say, a cartoonist writ large (see above example from the Banksy website).

All-in-all, a fun and inspiring weekend. And now, it's back to work ...

UPDATE: There's a fuller report on the Comix Thing over at
Tim Harries' blog