Christmas cartoons: It gets earlier every year

Christmas starts early for cartoonists. I have been doing festive cartoons and company Christmas cards (excerpts below) for some time now. Not complaining, keeps me busy. But I reckon I can now draw Father Christmas, Rudolph and the elves in my sleep. 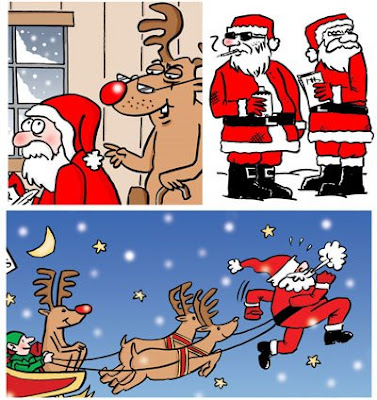 I'm a fan of Eddie Campbell, the comic-book artist best known for illustrating the graphic novel From Hell. His autobiographical comics are great, particularly How to Be An Artist (which features the priceless opening line "How to sucessfully be an artist - not to be confused with becoming a successful artist ...)

Anyway, he has now joined the "blogosphere", as people insist on calling it, with The Fate of the Artist. A blog in which the author appears as himself. His only concern is that he will now put into his blog what he once put into one-page diary strips. Let's hope that doesn't happen. Thanks to Linkmachinego, as ever.

This week's local paper story was about a school holding a competition to build robots out of Lego. An innocuous enough story, but one that allowed me to have some fun. There's more than a little Simpsons and Futurama influence at work here! 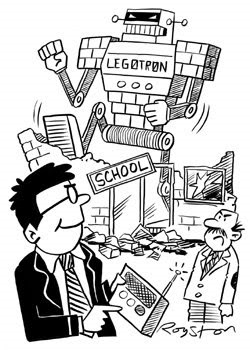 James Bond fever/hype seems to be everywhere you look right now, so I may as well keep up. The local paper story I was asked to illustrate this week was about the South East charity premiere of Casino Royale, which took place just down the road in Canterbury. Naturally, many of those attending went dressed as 007 ... 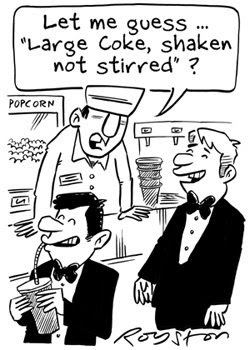 Has anyone else noticed that many major world leaders and events seem to be getting the comic book/cartoon treatment these days?

An old cartoon of mine from The Oldie has been republished in the magazine's Christmas stocking filler book Bling, Blogs and Bluetooth, which was released recently. 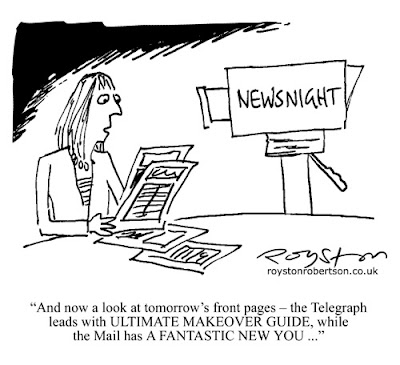 It's one that I dashed out in a bit of a hurry to make up a batch. So it sold, of course. I was a bit embarrassed by its slapdash look when I first saw it in print. But it's an OK gag, so I suppose I just about got away with it.

Get one for the Oldie in your life ... 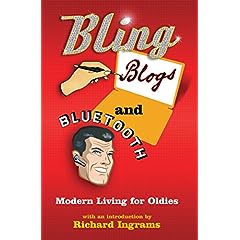 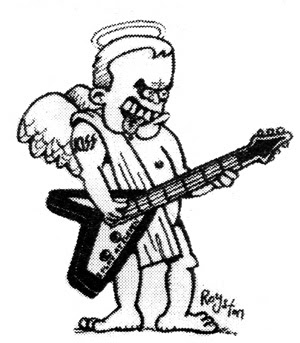 I recently found this cartoon illustration in an old newspaper from 1996. I have no recollection of drawing it. I worked as a journalist for ten years, as a reporter and later a sub-editor, and when I was working for my then local paper, in Walthamstow, East London, they would sometimes ask me to draw cartoons to go with articles ... for nothing of course, but I was happy then just to see my stuff in print, so I can't complain.

This one was for the music column, which was always a bit anarchic so there is nothing to indicate why the cartoon is there! It's not even Valentine's Day. Anyway, I include it here because unlike most cartoons from this period (I was 27 when I drew this and had not yet started submitting gags to magazines regularly) it doesn't make me cringe too much. It took me ages to figure out what's written on that guitar ("* Play at eleven", obligatory Spinal Tap quote).