And a Happy New Year to you all. 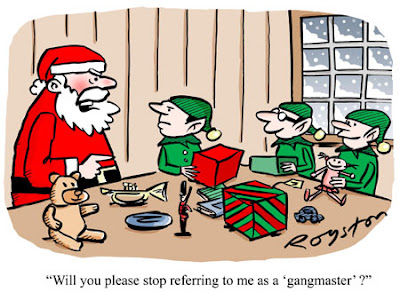 For some reason, most of the Santas I've drawn this year have been grumpy or slightly dodgy. Next year, if you need a moody Father Christmas, I'm your man.
Posted by Royston Robertson on 22.12.06 1 comment: Links to this post 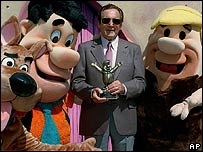 Here's the story at the BBC

"Cartoon legend" is no overstatement. Hanna-Barbera cartoons were loved by kids of many generations. I will give my "Hanna-Barbera: Tunes From The Tunes" CD a spin in tribute! (They're all on there ... Top Cat, Yogi Bear, Flintsones, Wacky Races, Hair Bear Bunch, Hong Kong Phooey, Scooby Doo, Banana Splits ...)

William Hanna and Joseph Barbera are so linked with these Saturday morning cartoons from the 1950s onwards that the fact that they created Tom and Jerry back in the 1940s is sometimes overlooked. That's quite a body of work!

Here's a very old cartoon of mine, by way of a "tribute". This appeared in the now-defunct Saturday "Metro" section of The Times back in about 1998. 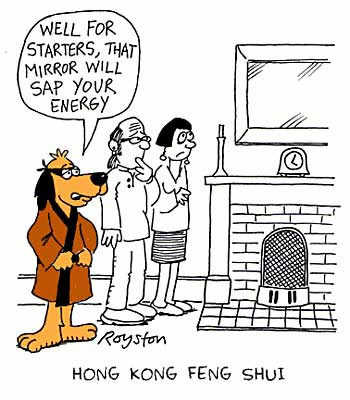 Posted by Royston Robertson on 19.12.06 3 comments: Links to this post 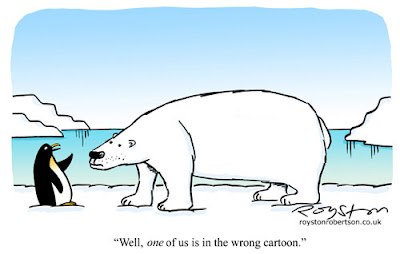 Here's a Christmas cartoon for you. Except, well, it wasn't really intended as a Christmas cartoon at all. It was sold to Reader's Digest back in June and they held on to it for the current issue because, I suppose, snow=Christmas. I remember colouring this at the height of the summer heatwave and I swear it made me feel cooler in my stuffy attic room.

Last week I attended a Christmas bash held by Reader's Digest in London. I was a bit under the weather and tragically I had to forego the free booze and canapes in favour of mineral water! But it was great to catch up with some cartooning pals, and chat to a few I hadn't met before. It is written that when two or three are gathered in the name of cartooning, they shall moan and complain about the business. So there was a fair bit of that, but in a good natured way. Probably because of the free booze.

Posted by Royston Robertson on 11.12.06 4 comments: Links to this post