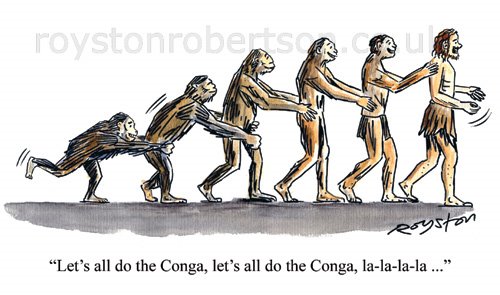 Three out of the four cartoons I submitted for exhibition at the Shrewsbury Cartoon Festival can be seen in the Boffination show (which is at the Bear Steps Gallery until May 9) but this is the one that got away.

I always knew this one would have an outside chance, because with the theme being Darwin-inspired they were bound to get lots of "Ascent of Man" cartoons. And they did. But once I had the idea of them do-do-doing the Conga, I just had to draw it up. Makes me chuckle, anyway.

Talking of Shrewsbury (as have been doing quite a lot on this blog lately, don't worry it'll stop soon) I was alerted today to the fact that the BBC picked one of my Boffination cartoons to illustrate an article on the festival. Excerpt below. 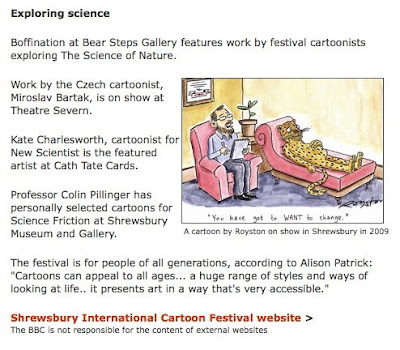 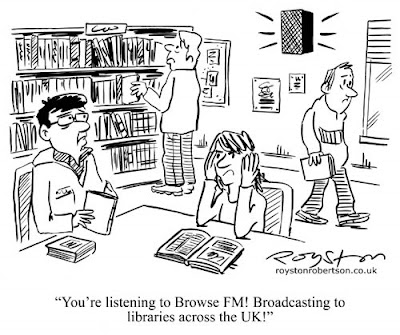 "You're listening to Browse FM! Broadcasting to libraries across the UK!"

Unwanted piped music seems to be wherever you go these days. So when trying to come up with a cartoon on that theme, in February of 2008, I decided to think of what would be the most outrageous place you could have piped music. The library was the answer I came up with, and the cartoon above was the result.

Now, you may have seen this news story last week: Libraries criticised for playing music. Yes, it's another case of life imitating cartoons! And as the gag did not sell, it proves that punctuality is crucially important with topical cartoons i.e. just as a cartoon that is created too long after the event is useless, so is one that arrives too early!

Tweeting and warbling at Shrewsbury 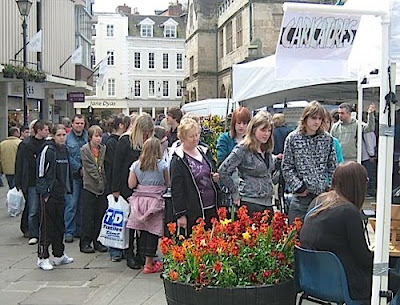 Well, Shewsbury 2009 has been and gone, or #shrews09 as us cutting-edge Twits call it. Yes, this years Shrewsbury Cartoon Festival, the sixth, was the first to be covered live online, by Matt Buck, Alex Hughes, and myself, for Bloghorn.

Alex and Matt did most of the really technical stuff, uploading video and audio clips, while I wrote some words, took quite a few photos (such as the one of the rather impressive queue for caricatures, above, which remained constant throughout the festival) and asked silly questions like, "What the Tweet is the difference between using the hashtag and the at-symbol?" It was a steep learning curve, luckily I managed to cling on. 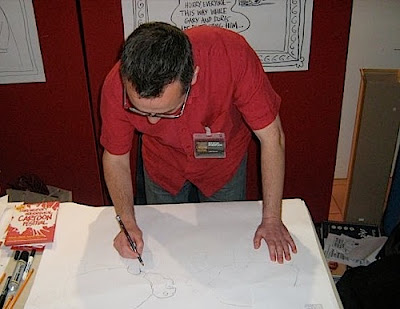 It wasn't all new media though. Here's me doing some old-style drawing, roughing out a contribution for the Humurals. These large cartoons decorated the Darwin Shopping Centre (the great man was born in Shrewsbury, hence the enthusiasm for marking his bicentenary at this year's festival). Thanks to Duncan Bourne for taking this photo ... I'm glad I haven't evolved a bald spot yet.

I drew a cartoon involving a couple of Galapagos Island tortoises in a credit crunch scenario. Here's the cartoon on display, bottom left, followed by a close-up. 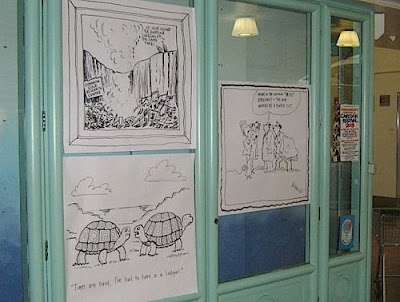 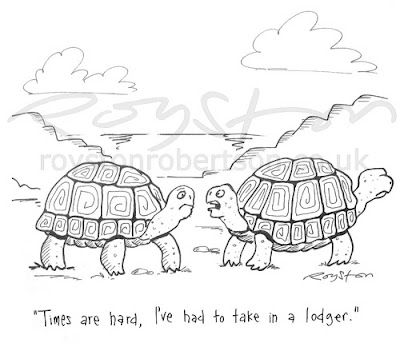 "Times are hard, I've had to take in a lodger."

No Shrewsbury Festival would be complete without a bite to eat and a few drinkies for the cartoonists, followed by some raucous singing and the obligatory drawing on tablecloths. 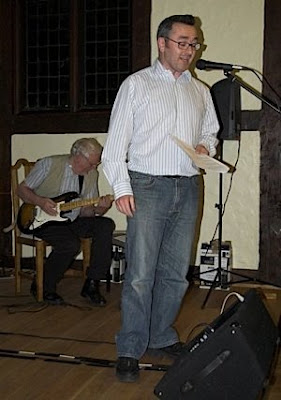 Here I am trying not to get stuck in "Stuck in the Middle With You", helped considerably by Noel Ford on guitar. Tim Harries, out of shot, also provided acoustic guitar and reminded me when to come in and what notes to sing. 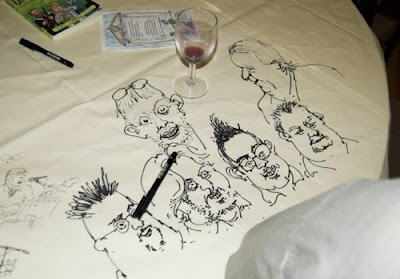 And that's me fourth from the left, immortalised by the genius that is Martin Honeysett. He's famed for drawing highly unattractive types for the likes of Private Eye and Punch, so he had plenty to work from with us lot. Thanks to Gerard Whyman for these last two pics.

The icing on the cake for me was that my sperm and egg cartoon, which I've never managed to get published anywhere (I blogged about that here) was bought by a festival-goer who saw it in the Boffination exhibition. See, I knew it was a good 'un! I've got three cartoons in the show, which can be seen at the Bear Steps Gallery until May 9.

As well as being a chance for us all to meet up and have a laugh, there was something of a support group feeling at this year's Shrewsbury. Few industries are immune from the recession, and many cartoonists are feeling the pinch, with a drop in offers of work. Most people remained upbeat though, and we hope we can do it all again next year in a better economic climate.

In the meantime, we'll do our best to promote the noble and ancient art of cartooning online, as long as I can tell my at-symbol from my hashtag.

Preparing for the Shrewsbury Cartoon Festival 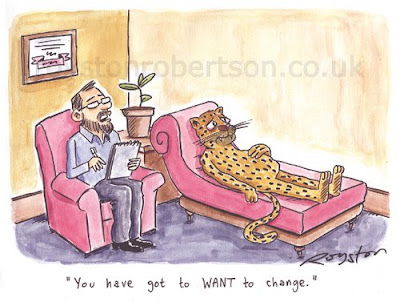 "You have got to WANT to change."

Getting my stuff together for the Shrewsbury Cartoon Festival, which I'll be heading off to later this week.

Here is another of the cartoons I submitted for the exhibition "Boffination", which can be seen at the town's Bear Steps Gallery. It runs until May 9.

This cartoon is a new version of one of my earliest published gags. The original appeared in the fondly remembered Journal of Silly in 1998 and a slightly different version in the similarly defunct Times Metro supplement in 1999. It seemed an appropriate one to revive as an exhibition watercolour, as it fits in with the evolution/Darwin theme. And, of course, recycling cartoons is good for the environment.

I'm not doing a Big Board at the festival like last year and the year before but I will probaby get involved in other stuff such as the "Humurals", a mural of cartoons on the festival theme, and I will be reporting on the festival for the PCO's Bloghorn along with Matt Buck and Alex Hughes.

I don't know if I'll get the chance to put anything on this blog, but I'll aim to do a few Twitter updates from my phone (as I learned how to do that a few days ago!) so they will appear in the column on the right.

I was delighted to find out today that one of my exhibition cartoons has sold already. No idea which one yet, but I'm chuffed as that will pay for travel and a few beers at least. Cheers!
Labels: animal, Journal of Silly, leopard, magazine cartoons, psychiatrist, Shrewsbury International Cartoon Festival, The Times 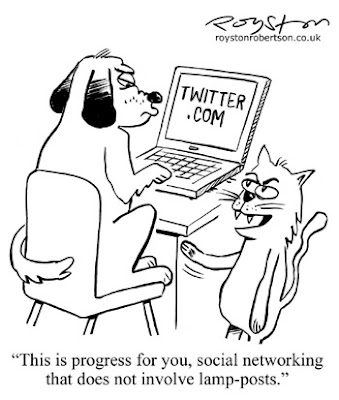 "This is progress for you, social-networking that does not involve lamp-posts."

Here's a cartoon about Twitter, which was drawn to accompany an article about a dog that has its own Twitter feed. No, really! OK, maybe the owner had something to do with it.

I set up a Twitter account recently. I was very sceptical about it at first, as I couldn't see the point of it. But as with all these sites, you really have to try them out to see what it's all about. I can use it in a social-networking way or to point people in the direction of this blog and my portfolio site.

I find that it's a lot more instant than Facebook and it's also good fun. There are a lot of very funny people on there, such as ace comedian Peter Serafinowicz and the comedy writer Graham Linehan, sharing thoughts and links.

My Twitter updates now appear on the right of this blog (though obviously some of the links would just send you back here!) or you can follow me at twitter.com/roystoncartoons.

Political cartoon: Fat cat takes us for a ride 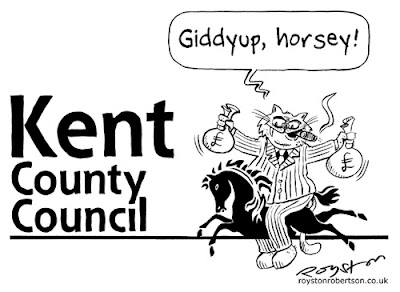 This cartoon appears in the Kent Messenger newspaper this week. Apparently, the number of Kent County Council staff earning more than £100,000 has nearly doubled in a year, and chief executive Peter Gilroy earned £255,000 last year, making him one of the wealthiest council bosses in the country.

I usually draw pocket cartoons for this newspaper group, i.e. straightforward gags accompanying a story, but this was a chance to do something a little different for me, and I joined the ranks of cartoonists currently employing the "fat cat" motif! The steed being flattened by this moggy of mammon is the Invicta horse, usually seen in a more proud position on the KCC logo, thus: 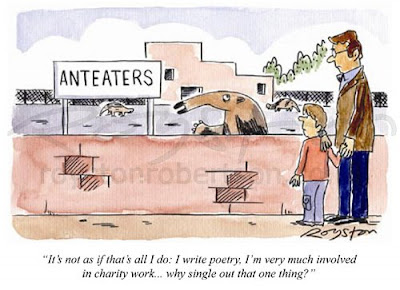 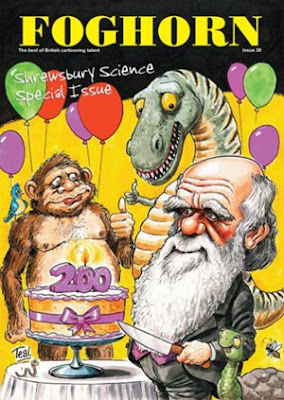 Cartoons appreciated by their subjects 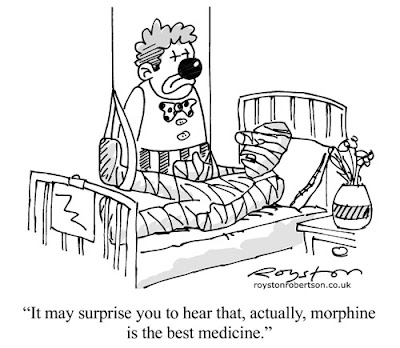 "It may surprise you to hear that, actually, morphine is the best medicine."

This old cartoon is to be reprinted to accompany an article written by, wait for it, a clown who works in hospitals, voluntarily giving his time to cheer up patients.

It's not often that someone who is effectively the subject of a cartoon gets in touch to say how much they appreciated it, but it's great when it happens.

Here's another example: This Reader's Digest cartoon was used in a lecture on black holes by a professor who is an expert in that field. "I'm afraid there's a black hole in our finance department."

And here's my favourite example. Unlikely though it sounds, the original of this cartoon, which appeared in The Spectator, was bought by someone whose work involves Health and Safety regulations pertaining to fairground rides. 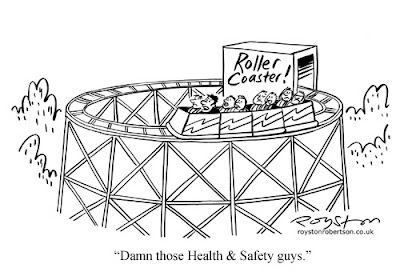 If only this kind of thing happened with every cartoon, we cartoonists would be a lot richer!