A real-life cartoon and a sound thrashing 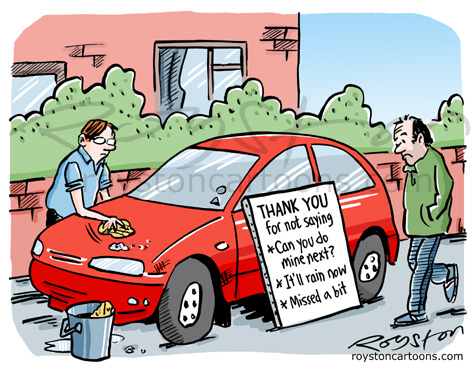 It's a sunny Sunday. Ideal car-washing weather. Can't be bothered though, so here's a cartoon about car washing instead.

Occasionally a cartoon idea comes along that doesn't take much writing because it is plucked from real-life experience. This one came while washing our car outside the house one day in the summer.

Within about five minutes I had heard the first comment and the second one followed shortly afterwards, from two different people. I added the third one as these kind of jokes work best in threes -- and because I was surprised I didn't hear that one too.

The cartoon can be seen in the October issue of Reader's Digest, as can the outcome of the most recent Beat the Cartoonist caption contest in which I took part ... 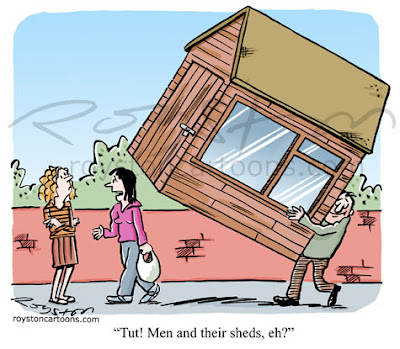 Well, it had to happen, after crowing about scoring a hat-trick in the contest I was well and truly beaten. Soundly thrashed, in fact, as my original caption, above, came fourth!

The winner was by one S.N. Browry: "He agreed we should provide accommodation for my mother." And I have to admit that that's pretty good. I still prefer my original, of course, the new one doesn't really explain the loved-up look on the guy's face, but I can see that it seems like a bit of an anti-climax as a reveal.

Ah well, it's still 3-1 to me. I would insert some kind of footballing metaphor here, but I don't really know anything about football.

Not Yet Sold: Cats cartoon 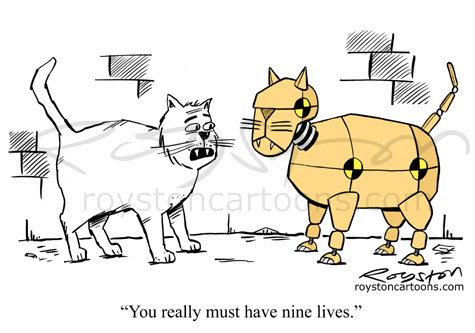 "You really must have nine lives."

I'm not sure if this one works, or if it is that original, but I was really pleased with my design for the "crash test cat dummy"! All comments welcome below, as usual. 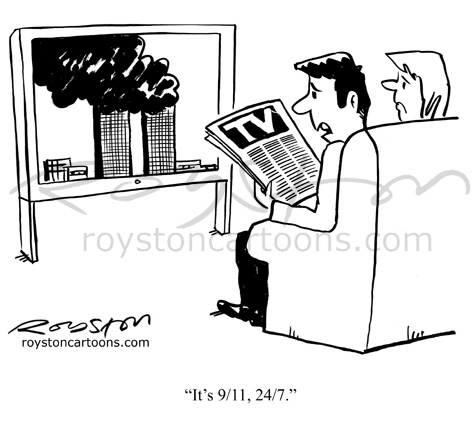 "It's 9/11, 24/7"
Some might accuse me of being disrespectful with this cartoon, which is in this week's Private Eye, but it is about excessive media coverage rather than 9/11 itself.

Of course the recent 10th anniversary should have been marked to a significant degree, but I always get an uneasy feeling at the way those images of death and destruction are played and replayed like an action film. This cartoon maybe puts the point more elegantly: Doonesbury.

Talking of Private Eye, you may have heard that it's about to turn 50. Here's a piece I put together for The Bloghorn, online diary of the Professional Cartoonists' Organisation.
Labels: 9/11, magazine cartoons, media cartoons, Private Eye, September 11, terrorism, TV 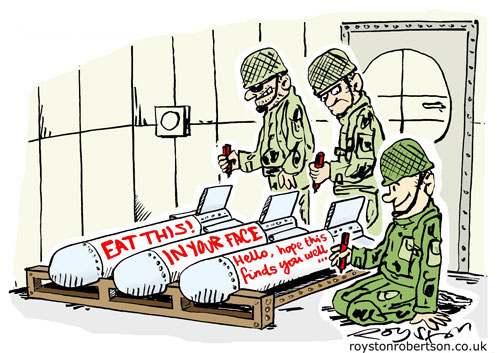 My "static" portfolio site has been a little too static for longer than I care to remember, but last week I finally got around to updating it. I've added lots of more recent cartoons, ditched some of the older ones, and have put up a few that haven't been online before, like this one. Check out the site here: www.roystonrobertson.co.uk
Labels: army cartoons, bad taste, freelance cartoonist, magazine cartoons, military cartoons, portfolio, Royston Robertson

Mucky in Margate and rude in Ryde

Here's an article I wrote for the September issue of The Jester, newsletter of the Cartoonists' Club, about two recent cartoon-based excursions:

Reader, I have been corrupted over recent weeks – not once but twice! My mind has been disturbed by filth of such depravity that it is little wonder Her Majesty's guardians of morality and taste pursued it through the courts. 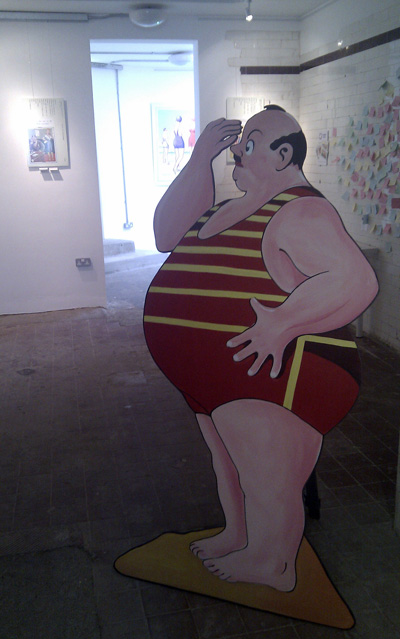 I refer to the saucy seaside postcard. And in reality, the fact that such honest vulgarity was prosecuted as obscene is as much of a joke as any on these colourful cards.

The Pie Factory Gallery in Margate hosted an exhibition called I Wish I Could See My Little Willy which featured cards deemed too rude to view by committees of taste and decency on local councils across the country in the 1950s.

Above: a lifesize cut-out at the Pie Factory Gallery based on Bob Wilkin's postcard "I wish I could see my little Willy"

The excellent exhibition was run in conjunction with the British Cartoon Archive and many of the cards, by the acknowledged master of the genre Donald McGill, and by other artists, were displayed along with their obscene-publications index cards.

An interesting story emerges, showing how ideas of obscenity are subjective. Often what was seen as mucky in Margate was not seen as rude in Ramsgate, just a few miles down the road. And vice versa.

On the day I visited, there was an excellent free talk and slideshow by Nick Hiley, curator of the British Cartoon Archive, which is based at the University of Kent in nearby Canterbury. The talk was about the various prosecutions around the country and, ultimately, the show trial of McGill in Lincoln. It was held in the old magistrates’ court, now the Margate Museum, and Dr Hiley spoke from a witness box on caster wheels.

The prosecution of McGill was the subject of Getting the Joke, a 2006 Radio 4 play that we listened to after the talk, following an introduction by its writer, Neil Brand. The play featured enactments of some of the most well-known cards and Brand revealed that when the young actors, who were unfamiliar with them, looked for guidance he simply said: “Think Carry On films ...” 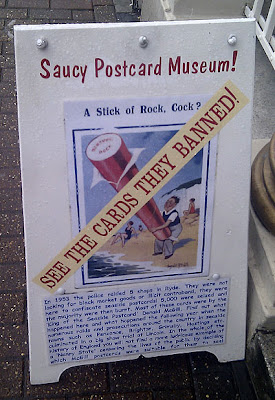 The Margate show is, alas, over, but for a permanent museum dedicated to Donald McGill head over to the Isle of Wight. I was there on holiday the week before my Margate excursion so I popped over to Ryde to see the Donald McGill Postcard Museum, which opened last year.

“Museum” may sound a little ambitious as it’s one room, albeit very grand one, behind a café, but boy do they make good use of the space! There’s lots too see – not least the impressive sight of postcards all over the walls and ceilings like a huge mosaic. Plus there’s original art, letters, promo material and more. So give yourself a couple of hours if you visit.

The museum shows that McGill's work was not always saucy and about the seaside. His career ran from 1904-1963 and spanned two world wars, so it's quite a reflection of changing times and, of course, there are lots of propaganda cards. It’s fascinating to see that a lot of his Hitler cards were “recycled” jokes about the Kaiser! Also on show are some early drawings from the unpublished Grown Ups’ Nursery Book.

Above: the sign announcing the Ryde museum, featuring Donald McGill's notorious "Stick of rock, cock?" McGill claimed no vulgar interpretation was intended and the man is simply "taking the weight on his upper legs". Ahem

It’s also very playful exhibition, there’s a police van, with the registration F1 LTH, carrying boxes of confiscated stock, a life-size postcard that you can be part of, and even five joke exhibits – fakes that you are invited to spot. I won’t ruin the fun and reveal them. 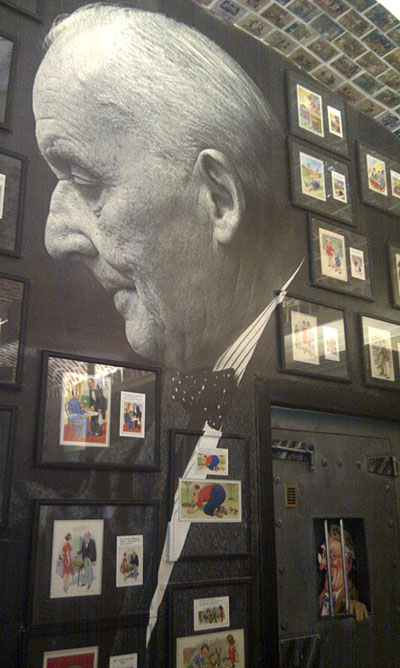 Above: Donald McGill on a wall showing his original artwork alongside the printed postcards, at the Ryde museum

When you've finished looking round, to prove that this is truly the art of the people you can even buy original-issue McGill postcards for no more than a few quid each. 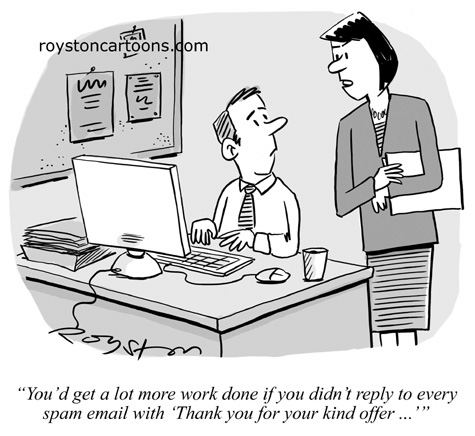 "You'd get a lot more work done if you didn't reply to every spam email with, 'Thank you for your kind offer ...'"

Today I unwittingly sent a spam message to hundreds of followers on Twitter. So I'm posting this cartoon here as an apology to them and a thank-you for a) realising the message clearly wasn't from me b) offering advice and tips and c) not un-following!

It was my own fault for clicking a spurious link. This is the first time this has happened to me on any social-networking or email account, so maybe I'd got blasé. It's one of those things you don't think will happen to you until it does.

Anyway, no-one died. In other news, the kids are back at school today after the holidays and a quiet hush has descended on the house. Aaaahh ...