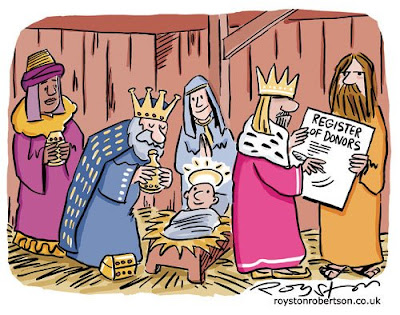 The above cartoon is in the new issue of Prospect, in a prime spot on page three. Which is nice.

Christmas cartoon: With apologies due 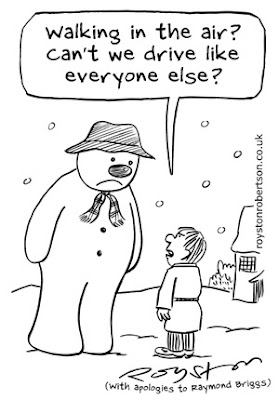 When an cartoonist copies the artwork of another artist, as part of the joke or to make a point, it's customary to provide a credit saying "After ..." or "With apologies to ...". When I sent this cartoon to a local paper here in Kent, where I have a regular slot, I forgot to put that on the cartoon.

So I've rectified that here and send double apologies to Mr Briggs! Hope he doesn't sue ... especially as we recently bought a DVD featuring both The Snowman and Father Christmas, and it's on heavy rotation in our house thanks to my kids.

I must admit though, every time I watch it and that live-action intro from David Bowie comes on, with the Thin White Duke wearing his best Christmas pullover, I do wonder WHAT were they thinking?

For any international readers who don't know what I'm talking about, The Snowman animated short is a Christmas TV institution here in the UK. You can find it on YouTube. There is a version with a more subtle opening, featuring Raymond Briggs himself I believe, but it's also worth checking out the Bowie one for a laugh. 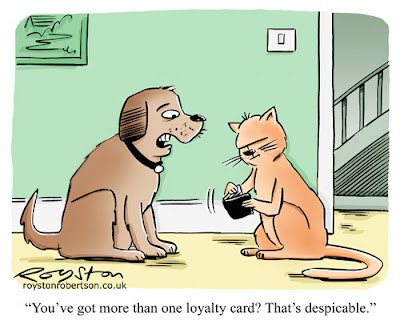 It's that time of year when even cartoonists emerge from their hovels to attend Christmas parties. And so it was that last week I went along to a party thrown by Reader's Digest (cartoon from the Christmas issue, above) at the restaurant at the top of the Harvey Nichols store in Knightsbridge, London.

Much champagne was quaffed and canapes nibbled, while chatting to other cartoonists, illustrators, writers and Digest staff. There was the usual complaining about the cartooning business, as is traditional, and marvelling at some of the bizarre canapes. One of them looked like tomato soup in a small, thin glass and turned out to be, er, tomato soup in a small, thin glass – a kind of Harvey Nichols version of Cup-a-Soup. 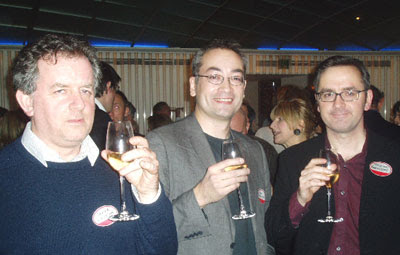 Here's me, on the right, with cartoonists Ger Whyman, aka "Ger", left, and Ian Baker, aka "Ian Baker". Ger's not really cross, I think he's pulling a comedy face. Thanks to Clive Goddard for the pic. Afterwards several of us retired to a charming, tiny pub nearby for a fine pint of ale. A good start to the festive season and particularly welcome as most of us have been drawing flippin' Christmas cartoons since August.