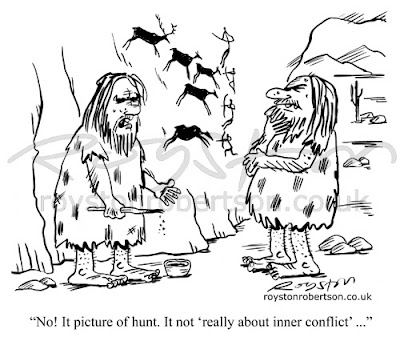 "No! It picture of hunt. It not 'really about inner conflict'..."

All cartoonists have favourite subjects to draw, and cavemen is one of mine. It's because you can go wild with the line, as the "costume" of the character is pretty flexible. And they're usually very ugly.

With a caveman cartoon, you're usually putting them in a modern context, so you're always aware that there's a chance the joke has already been done on The Flintstones! I use the word "modern" loosely as, amazingly, The Flintstones turned 50 last week.

I was reminded of this cartoon by a documentary I saw the other day which featured footage of J.R.R. Tolkien angrily denying that the Lord of the Rings was in any way a religious allegory, as everyone insisted on telling him. It must be annoying for any artist to have someone suggest a sub-text in their work that they never intended. Thankfully, this rarely happens in cartooning.