Clown cartoon: It's not so sad 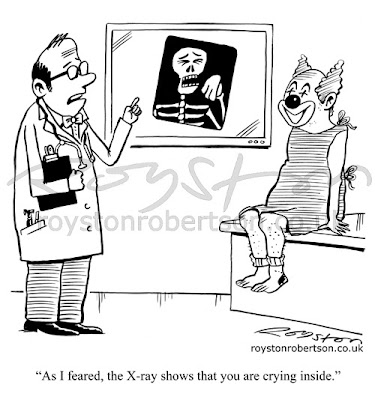 "As I feared, the X-ray shows that you are crying inside."

Well, maybe. But I can't help feeling that there are quite a lot of things sadder. Genocide, child poverty, that kind of thing. So pull yourself together, clowny.

I originally drew tears in mid-air on the X-ray. But that kind of thing looks a bit old-fashioned in cartoons these days, so I took them out. But then I worried that it looks like he's sneezing. Anyway, I sold the cartoon so I try not to worry once that happens. But these are the things that keep cartoonists awake at night.