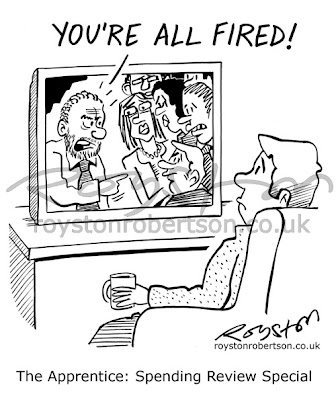 Here's a cartoon drawn for a local paper on the Government's spending review, which was announced on Wednesday. I've combined reality TV with grim old actual reality.

I think a lot of people thought beforehand that the spending review would mean that councils would be forced to cut back on wasteful excesses in the area of paperclips, custard creams and so on.

They forget that real cutbacks means cutting real people's jobs. It is quite staggering that that the Government, which generally aims to cut unemployment, is about to put half a million people on the dole.