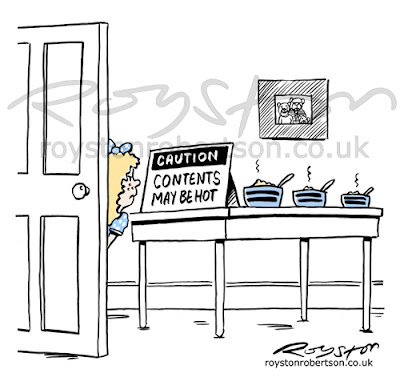 It's inevitable, with the amount of cartoons you produce working for magazines, that you like some more than others. This one I thought was just OK, a solid enough joke but generally I'd call it a batch-filler.

So, of course, it was the only one that sold in a recent batch sent to The Spectator, and can be seen in this week's issue.

Originally, I drew it for the CCGB online cartoon contest, in one of the weeks where you have to come up with a captionless cartoon. The theme was "Hot". However, completely "silent" cartoons, i.e. with no wording in them at all, are preferred, so it didn't do very well!