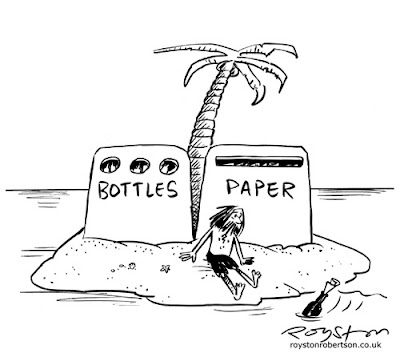 The desert island is probably the most well-worn gag-cartoon scenario. I've drawn a few over the years, though not that many. But I think this is the first one to appear in a newsstand magazine, which must be some sort of personal milestone, I suppose.

It is one of three cartoons by me in the November issue of Reader's Digest. I was surprised to see so many used in the one issue, though obviously I was also pretty happy about it!

Sex cartoon: What to do afterwards? 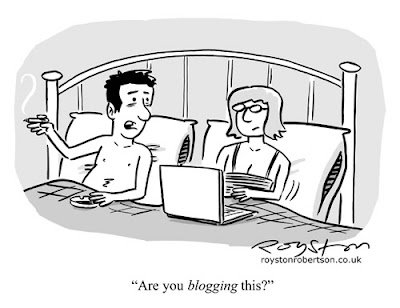 I was commissioned to do bunch of cartoons on the theme of relationships for a forthcoming book. Here's one of them. And, yes, it's yet another blogging cartoon. Surely the well will run dry on that theme soon?

As you can see, I've gone for that old comedy stand-by, the post-coital cigarette, to indicate that sexual congress has just taken place. But even as I was drawing the cartoon, I was thinking that it's probably a cartoon signifier that should be retired. It's difficult to know how else to suggest that they have just "done it", without the cartoon getting too graphic, but the post-sex fag does seem a bit dated. Maybe something else will take it's place. All suggestions welcome ...

Another Big Draw has come and gone. This time at the revamped (and very large) St Pancras International in London.

My role this year was to be one of the four cartoonists drawing a banner for the Professional Cartoonists' Organisation, on the theme of "Transports of Delight". We were competing in the Battle of the Cartoonists against teams from Private Eye, The Independent and The Guardian. So we were up against such well-known cartooning names as Steve Bell, Martin Rowson, Dave Brown and Ken Pyne.

My team-mates were Pete Dredge, who draws The Directors in Private Eye, greetings card maestro Robert Duncan (that's Rob and Pete holding the banner above) and Guardian business cartoonist Kipper Williams. We had two hours to draw the banner and it was the fastest two hours of my life. We came up with a series of single-panel gags where the frames were drawn to look like train tickets. 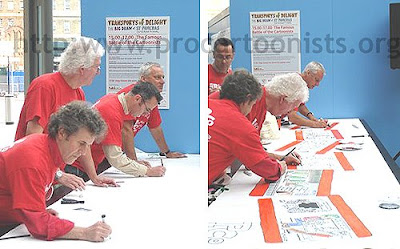 Voting was by members of the public, on a "who can cheer the loudest" basis and sadly we did not win. That honour went to the Independent, which was nice as the Guardian usually wins. We did get a lot of good feedback from the public though. The design of the banner was much admired, particularly as we were the only team that didn't go for the motif of a train careering off the tracks filled with politicians and City fat cats ...

Here are my gags from the banner (click to enlarge). We had planned to do one each but when we saw the banner we realised it was bigger than we thought! So we had to improvise and do one and a half tickets each, the second being a version of one I posted here just a few days ago. 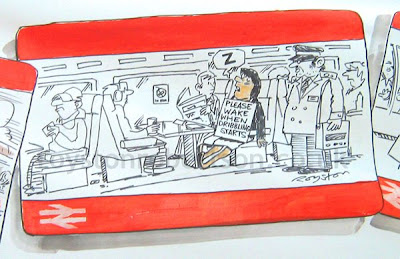 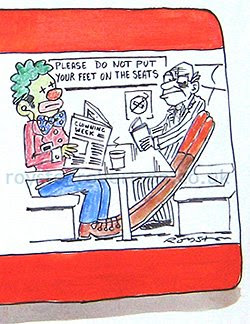 See the full banner at the PCO blog

The Big Draw: Transports of Delight 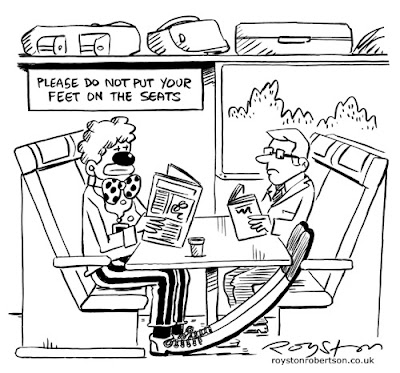 Transports of Delight is the theme for the main cartooning event in the 2008 Big Draw campaign, which this year takes place at St Pancras International Station in London on Saturday (October 18).

The Big Draw is an annual, month-long campaign designed to get the nation drawing. I've taken part in the cartoon-based Big Draw events for the past two years, at Somerset House and Covent Garden respectively, and they're always fun.

This year, for the first time, I will be taking part in the ever-popular Battle of the Cartoonists, where four teams slug it out to produce the best 12ft cartoon banner. I'm on a team of four representing the Professional Cartoonists Organisation (PCO). My team-mates will be captain Pete Dredge, Kipper Williams and Robert Duncan. We'll be up against teams from The Guardian, The Independent and Private Eye.

The Battle of the Cartoonists runs from 3pm-5pm. The winning team is decided clap-o-meter-style – i.e. via vocal public approval, so please come along and shout for us! 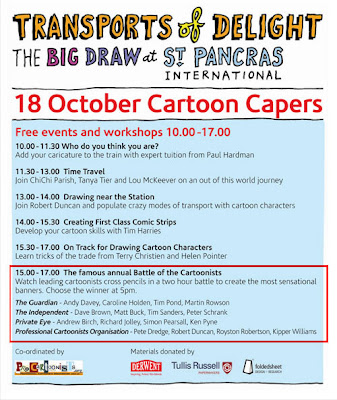 There will also be workshops for all ages run by PCO members between 10am and 5pm. So that's the place to be if you want to learn how to draw cartoon characters, caricatures or comic strips.

Activities will take place in The Circle – second side entrance on St Pancras Rd and opposite the Gymnasium. I'm told that the dedicated area will be marked out with artificial grass and picket fencing so you can't miss us.

The Big Draw: Get involved

Here is a case of life imitating cartoons. Exhibit A: a gag published in Private Eye in 1998 ... Exhibit B: A kids' animated film from 2008 which is about to hit a multiplex near you ... 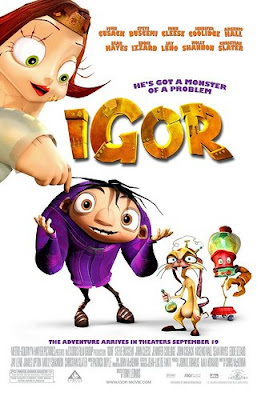 OK, it's not a Disney film, and the focus is on Frankenstein's assistant, rather than the evil genius himself ... but still, it's a cuddly kids' comedy about creating a monster. I came up with the idea for the cartoon because I couldn't believe that they'd done a "Disneyfied" version of The Hunchback of Notre Dame and I just thought, What will they do next? But even at the time I remember thinking that the idea of doing a kids' version of Frankenstein was probably not that far fetched. Turns out, I was right.

Here's another case of life imitating cartoons. I saw this on a cartoonists' internet forum this week (thanks to Simon Lake). Click the image to read it: 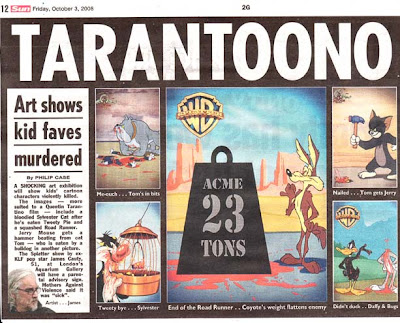 I was compelled to point out that I was killing much-loved cartoon characters 20 years ago! Along with a group of friends I used to run a self-published "adult" comic called DoodleBug in the late 1980s. With scant regard for the copyright laws, we had a regular feature called "Kill the Cartoon Character of Your Choice", which involved readers suggesting characters that they'd like to see dispatched. We would then oblige.

As a result, we had Garfield shot, Scooby Doo beheaded, Snoopy hanged, and Popeye beaten to a bloody pulp (after someone swapped his spinach for a tin of spaghetti hoops). It was all very juvenile, of course, but then we were juveniles. Well, almost. I was 19 when we started the comic. Here's one of the strips, which sees everyone's favourite cute canary meet his maker ...

Again you'll need to click the above image to read it. The similarity between the image of Sylvester the cat in my cartoon and in the Jimmy Cauty painting is incredible ... though I'm not alleging anything other than coincidence I should add.

Of course, the moral here is that if I had thought "art gallery" for these cartoons, rather than self-published comic, and if I'd written the script for a kids version of Frankenstein rather than doing that one-off gag, I'd probably be a lot richer than I am now. 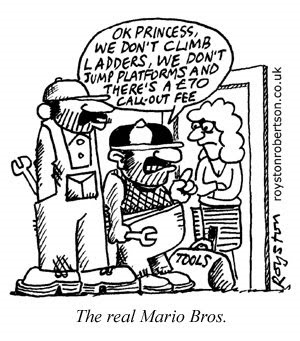 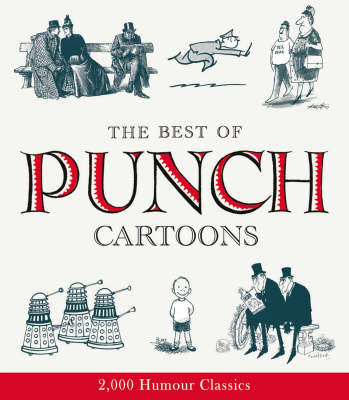 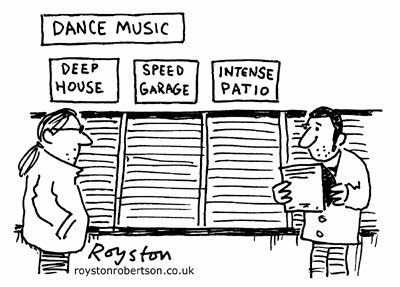