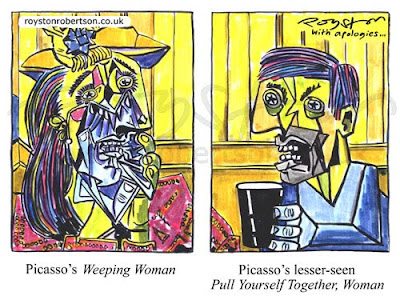 It is traditional when producing cartoons based on works of art to put "After ..." followed by the name of the artist. Out of respect, this often takes the form of "Apologies ..." which I have used here.

It's genuinely felt too, because I love Picasso's "Weeping Woman". It's an amazingly powerful work, particularly when you see it in a gallery. The painting is about bereavement in the Spanish Civil War, and I wondered whether it was a suitable subject for a cartoon.

In the end I decided not to let my liberal guilt get in the way of a cheap gag! So here it is, and sorry again Pablo. The cartoon can be seen in the current Private Eye.

It was drawn with coloured brush pens, as I thought that would be better than using Photoshop. And yes, I used a lightbox to get the "Weeping Woman" right. It was quite a lot of effort to go to for an on-spec gag, much more than is usual, so I'm glad it sold.