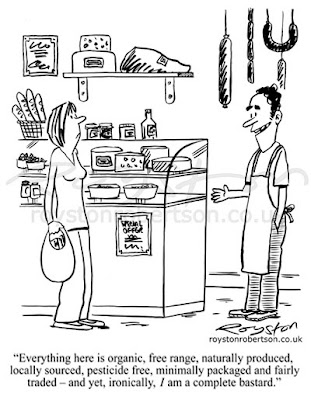 "Everything here is organic, free-range, naturally produced, locally sourced, pesticide free, minimally packaged, and fairly traded – and yet, ironically, I am a complete bastard."

The long-caption cartoon is always a tough sell, but the sweary gag is even more so. This one ticks both boxes, but Private Eye went for it anyway and it appears in the current issue.

Of course, "bastard" is, arguably, not really a swear word. It is a perfectly, ahem, legitimate word. And of course, Quentin Tarantino put the word (albeit misspelled) in the title of his new film. So no big deal, right? Even so, I use swearing very rarely because in the gag cartoon, a very minimalist form, every word needs to be justified.

Here's a rare example of a cartoon where I avoided swearing, but the cartoon editor felt that actually it was needed!

So, if every word needs to be justified, why the long caption? Well, sometimes you can get away with them. Here, the long list is part of the joke and I think I got a good rhythm to it. Here's another example of a cartoon with a long caption.