Music cartoon: In with the IT Crowd 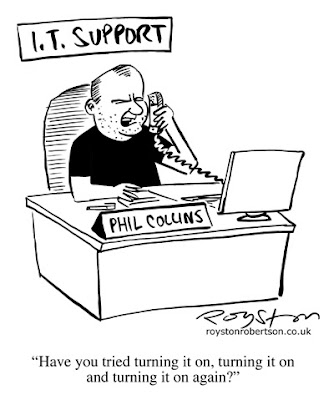 I drew this cartoon for a "just for fun" competition over at the public forum on the Cartoonists' Club website. Well, I say that I drew it for the competition, in fact it was immediately ineligible (or illegible if you don't know the Genesis song that it refers to!)

The idea behind the weekly competition is that everyone draws a cartoon to go with a caption, without changing the wording at all. The caption was "Have you tried switching it off and on?" but my mind went off at a tangent and came up with this one.

The competition has been running for a few weeks and I've entered a couple of times. It's a fun exercise, but it's pretty far from how I would normally create cartoons. Usually I do have a clear joke in mind when I sit down to draw the cartoon but often it gets tweaked or changed completely, which is what happened here. As the competition was just for fun, I posted it anyway.