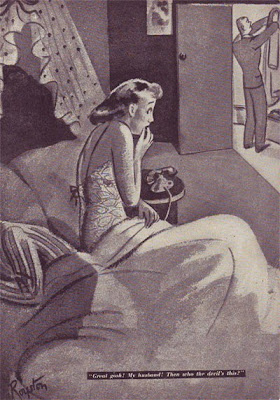 "Great gosh! My husband! Then who the devil's this?"

Yes, unlikely though it sounds, it appears there was once another cartoonist called Royston. And with a signature eerily close to mine! These were emailed to me be Denise Miles, from Sydney, Australia (click to enlarge).

Denise found them in the 1941 annual for Man magazine, a saucy periodical published by Land newspapers in Australia. 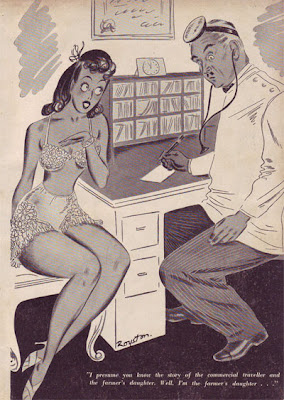 If you know anything about this Royston (the name is more common as a surname, so that may be the case here) let me know in the comments section below, or send me an email. My theory is that in the future I invent a time machine, go back to the 1940s and illicitly sign a bunch of contemporary cartoons, before sending them off to magazines which I hope won't notice.

Hopefully, someone else will be able to provide more plausible information. Look at the similarity of the signature to mine though. I'm officially freaked out. 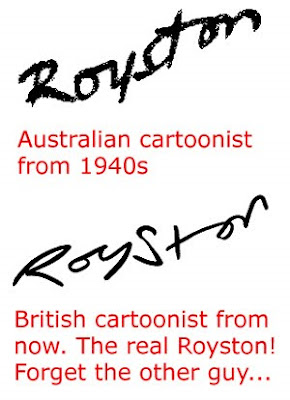 Denise tells me that the Man annual has a cover price of two shillings and contains many cartoons by Royston, alongside some beautiful old advertisements for Australian companies, an ad for war savings certificates and another telling its wartime readership to "Speak no rumour, hear no rumour".

Other cartoons in the book are signed "Such", "Barnes Amos" and, possibly, "Gibson". There are also cartoons by someone whose signature is a flower.

Let me know if you can provide more info. Now, I'm going back to the shed to work on that time machine ...