The phrase "you're only as good as your last idea" certainly applies to cartooning! It's something I often think to myself, usually when facing a blank piece of paper and struggling to come up with fresh ideas for gags. In this case the phrase became a gag itself, one which can be seen on the letters page of February's Prospect magazine. Here's a cartoon from the January edition of Reader's Digest. Cartoons are often based on current phrases and cliches that we hear a lot, usually in the media. This is one of those kind of gags. It's just a play on words really, but I think you can get away with jokes like that if it offers a good visual image. I had fun drawing this one, imagining what a black hole in an office would look like. 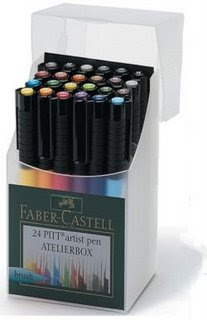 Here's a tip that I got from the US Wisenheimer cartoonists' forum that will be of interest to anyone who uses Faber-Castell PITT brush pens.

If you do use them you'll know that the nibs can go flat very quickly. But because they usually still have lots of ink in them, I tend to hang on to them, sometimes using them for filling in or for roughs.

But Canadian cartoonist Michael McDonnell came up with this tip: If you take a pair of tweezers you can remove the nib and turn it around giving you a brand new brush tip to work with.

I've tried it and it works a treat. And I've since found that I have about 40-odd blunt pens stashed in various drawers and jam jars around my office. They can all be used as new, which means I've saved myself about £75. Hurrah. Thanks again, Michael!

Movie cartoon: One from the archives Here's my very first Private Eye cartoon, which appeared ten years ago this week. I know that because I remember that it was the week of my 30th birthday, and I've just celebrated my 40th*

Normally I cringe at the artwork when I see my older cartoons, but I think this one stands up OK. Probably because I was aping the Disney style. The idea for the cartoon came from the fact that there had recently been a Disneyfied version of The Hunchback of Notre Dame, though the character designs here were based on Hercules (our hero and his sidekick, voiced by Danny DeVito, of course) which was the big Disney film of 1997.

*Here's a cartoon I drew for a 40th birthday party invite last year. This is a joke I've had rattling around for a while that finally found a home in a local paper cartoon this week. I like the idea that eventually every innocuous insult will be deemed "offensive" by someone!

This is for anyone who's failing to keep up with a New Year fitness regime. Keep at it, folks. Or, alternatively, help yourself to another slice of pizza. You can always start properly on Monday. People often ask if I send a new batch of cartoons to several magazines at once. The answer is no, I send in rotation i.e. I send the gags to one magazine at a time, then any that don't sell I will send to the next magazine on my list. And so on. The main reason is that you'd look a bit silly if several magazines wanted the same cartoon. And the editors concerned wouldn't be too happy about it.

But there's another reason and it's this: sometimes they will print the cartoon before they've got around to telling you they're using it! Or there's some communication breakdown and you don't get the message. The above cartoon is a case in point. It is in this week's Spectator magazine, but I only found that out yesterday while browsing through the mag in in WHSmiths.

Regular readers will note that this is not the first time I've done an "HMV dog" cartoon. And it probably won't be the last.