Journalism cartoon: It's about multi-tasking 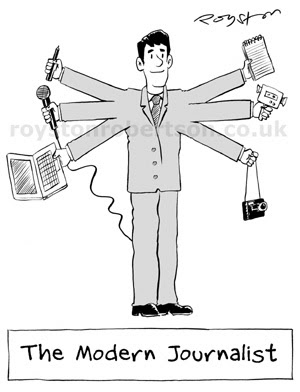 Here's a cartoon which accompanied a newspaper article about how journalists are embracing the multimedia world.

It's almost five years since I left newspaper journalism, where I was a reporter on local papers and later a sub-editor on the nationals. There was a degree of multitasking involved back then but I know from friends in the industry that it has rocketed over the past few years.

Clearly this cartoon, like the article it accompanied, which was about last week's Local Newspaper Week, is a positive look at the subject, which is fair enough. It's only right that journalists learn new skills in order to get their stories seen and heard across different media. But there is often a danger that they can spread themselves too thinly, and I know that they can be pretty stressed and overworked in the new media world.

Anyway, I'll be watching developments in journalism closely, as these are certainly changing times for the industry. Let's hope that, however the stories are delivered, quality journalism survives.