Cartoons that keep on going 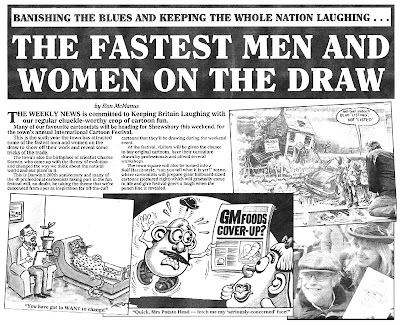 It's always amazing to me how some cartoons seem to take on a life of their own. My leopard on a psychiatrist's couch cartoon, which was first published 11 years ago (albeit as a different, black and white version) is a case in point.

Thanks to The Jester, newsletter of the Cartoonists' Club, I've just found out that it was picked for a preview of the Shrewsbury Cartoon Festival in Scotland's Weekly News (above, click to enlarge). That's it in the bottom, left. Shame they cropped the signature. The BBC also used it in a Shrewsbury piece.

I don't get paid for these PR uses, but the cartoon has already been published, I sold the original, and I've sold it for re-use many times, so that's OK. I'm happy to help promote the festival and it's good to know that the cartoon is still out there, hopefully making people laugh.

Incidentally, I normally cringe a bit at the attitude shown in this article i.e. "We're all wacky, zany cartoonists here to cheer you all up with a chuckle!" but at the moment it feels quite appropriate, like a genuine public service.