It's April Fools' Day! And rather appropriately I'm taking the afternoon off for the AGM of the Cartoonists' Club of Great Britain. For AGM read "large number of beers with cartooning pals". Hurrah for that.

April also brings with it the 5th Shrewsbury Cartoon Festival, a long weekend of diverse cartooning activity, which runs from April 18-20.

I've mentioned the festival here before and will do so again! If you can get along to it you won't be sorry. This will be my third one and I'm looking forward to another hugely enjoyable weekend.

Around 40 professional cartoonists and caricaturists from the UK and overseas will converge on Shrewsbury to cartoon and caricature for the public.

The theme of the 2008 festival is “Art” and one of the highlights will be an exhibition of new work by festival cartoonists entitled “But is it Art?” which has already opened at the town’s Bear Steps Gallery and runs until April 26. Here's one of the cartoons I submitted for the show. The festival offers opportunities to see artists at work, with 20, including myself, drawing on huge boards in The Square, others drawing caricatures and some running cartoon workshops.

Other highlights: The Guardian's Steve Bell will again deliver an illustrated talk. I saw his talk two years ago and it was hilarious. He really brings the "If" strips to life. Not to be missed. "Rogues Gallery", a one-man exhibition by Dave Brown, political cartoonist for The Independent, has already opened at Bear Steps and will run until April 26.

And of course, original artwork, prints and other cartoon merchandise will be available. All in all, an essential weekend for anyone interested in cartoons.

In the meantime, I'm going to warm up at The Cartoonist pub, off Fleet Street. So I've got a train to catch ...

More "But is it Art?" cartoons by PCO members

I was asked to write an article for the Australian Cartoonists' Association magazine Inkspot so I picked the subject of cartoons and their relationship to "Art" ... consequently I was a little confused to see the mag yesterday and find that that the opening paragraph is not mine and is about avian flu!

Then I got an email from my cartoonist colleague Clive Collins who was equally confused, saying it's his intro, from an earlier issue. I'm guessing that some page over-writing went on here. I thought I'd mention it on my blog in case anyone who read it thought I'd gone insane (perhaps affected by avian flu).

Below is a cartoon which accompanied the article (which I'll be reproducing on a Big Board at the Shrewsbury Cartoon Festival next month) and the article itself ... as it was meant to be seen. The subject of Art, with a capital A, and its relation to cartoons, or otherwise, has been much discussed among the UK’s cartooning community lately.

This was partly prompted by an exhibition at the Hayward Gallery in London, which was all about “laughing” and aimed to see if Art can be funny. So there was a machine that tells jokes, photographs of a man trying to fly, a video installation of a clown struggling through a forest – stop! Oh, my aching sides!

But the work of cartoonists, whose work is usually funny in a far less ham-fisted way, was not included. Cartoons, of course, are not seen as Art. There’s that capital letter again.

Another reason that Art is prominent in the minds of UK cartoonists is that it is also the theme of this year’s Shrewsbury International Cartoon Festival, which takes place on the weekend of April 18-20. Many cartoonists have already submitted cartoons on the theme “But is it Art?” for the festival’s exhibition and are now limbering up to produce a “Big Board” on the subject in the market square during the festival.

So, can cartoons be Art? The problem is that it’s one of those words, like “cartoons” and “comics” that can be interpreted in different ways. We all talk about producing artwork, but how many would claim they are works of Art?

I’ve decided that, really, I don’t care. And although I’m happy to see cartoon exhibitions promoting our industry, such as those at Shrewsbury, I always feel that cartoons look best where they belong: on the page. I recently attended an exhibition of work by Heath Robinson, but I had a pressing appointment and didn’t allow myself enough time to take it all in. But it didn’t matter; I just bought the programme and looked at the cartoons at my leisure in the format in which they were meant to be seen.

Cartoons, at the risk of sounding a bit Tony Blair, are The People’s Art. They belong in newspapers, magazines and books, more so than galleries. And when they are there, you can bet that they’re far, far funnier than a film of a clown stuck in a forest.

The Shrewsbury Cartoon Festival runs from April 18-20. The "But is it Art?" exhibition opens today (March 30) and runs until April 26. 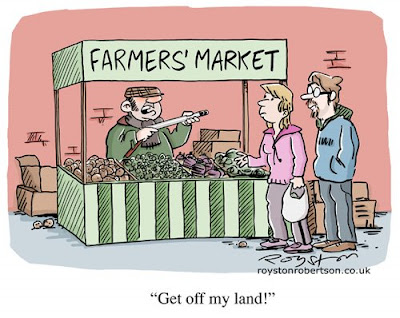 Here's a cartoon from the March issue of Reader's Digest. As I used to be a newspaper sub-editor for a living, it is to my eternal shame that when I first submitted this cartoon the possessive apostrophe was in the wrong place.

If you have been trying to look at my main portfolio website, you may be experiencing problems at the moment.

For the time being you can see the site at this alternative URL:
Cartoons by Royston: Business as usual! Here's a cartoon from this week's Private Eye. This one came about when I was trying to think up some gags and, looking for inspiration, I asked my wife to give me a few "themes" that I could work on. I'm not sure she even looked up from her sudoku to say, "Er, I don't know ... sudoku". I said something sarcastic along the lines of, "Great, thanks for the effort." But a cartoon still emerged. Not sure when the cat came into it. I just like doing cat cartoons.

Easter cartoon: Is it that time already?

Have a good Easter weekend, all. It gets earlier every year, doesn't it? Sometimes it takes a cartoon a while to find its rightful place in the world. This gag appears in The Oldie Review of Books, a supplement free with the current issue of The Oldie magazine.

They wrote to contributing cartoonists asking for gags on a books theme so I submitted some that I had on file. This one had been submitted to many magazines here and abroad – including The Oldie! – but had never sold. But it found a fitting home in a magazine about books.

This is why I like to refer to my files of unpublished cartoons not as rejections, but as gags that haven't sold yet...

Animal cartoon: One from the archives Time for another dip into the archives. Here's another of my early Private Eye gags, this one from ten years ago this month.

Not sure the joke is still relevant. The era of reality TV and makeover shows has enabled ITV to sidestep its inability to make funny sitcoms, and it seems to make very few these days, funny or otherwise.

Drawing wise, it's not too terrible I suppose! This is from the pre-Google image search days ... so they look nothing like hyenas. They're more wolfish. And that awful "rabbit ears" aerial on top of the TV is something I would never draw now. It's a sort of "cartoon shorthand" that I used to use a lot, like mortar boards to indicate schoolteachers. I'm not sure I've even seen an aerial like that, and I've certainly never seen a teacher wear a mortar board. So I stopped doing that. I do like the picture on the wall though, of the hyenas in happier times.

One thing I do remember about this cartoon is that it originally said "second part" rather than "next episode", but the Eye suggested the change – the thinking being that "second part" is more relevant to a drama show, rather than a sitcom. Ah, the subtleties of gag cartooning. And you thought these things were just thrown together. Here's a cartoon that was in The Spectator last week and makes a re-appearance this week in the media digest magazine The Week.

I tend to find that, broadly speaking, my cartoons fall into two categories: there are the ones that are based on observations of life, they're usually topical (in the sense that they are about the times we live in, rather than about this week's news) and, at the risk of sounding a little pretentious, there's a kind of "truth" to them. Then there are the ones that are just a bit silly, a throwaway line, sometimes a pun, a play on words, or a visual pun. "Soup of tomorrow" falls into the latter category!

To elaborate further, here's an example of one from the "observation of life" category ... And here's one from the "throwaway line" category ... I suppose, on balance, I find it more rewarding when I come up with cartoons in the first category. But I try not to take myself too seriously (a good idea if you're a cartoonist!) so it's always fun to do the "boom-boom" gags too.