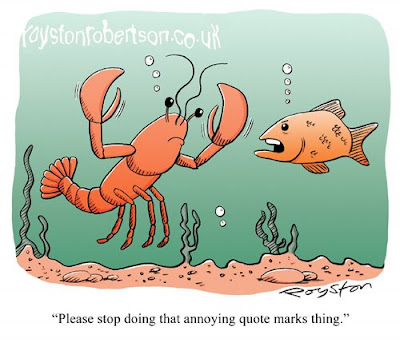 Here's a cartoon from the February issue of Prospect, which is on your newsstands now. It's always nice to be in Prospect as it's an elegantly designed magazine. The cartoons are mostly in colour and are well presented.

I met a Dalek yesterday 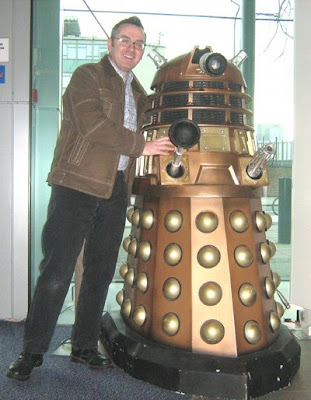 I've only been to BBC Television Centre once before and the only famous person I spotted that time was James Robbins, the BBC News Diplomatic Correspondent. No offence, James, but meeting this fella was a bit more exciting.

I was at the Beeb with five other cartoonists to take part in the recording of the BBC2 quiz show Eggheads. I'll put the transmission date on this blog when I know it. 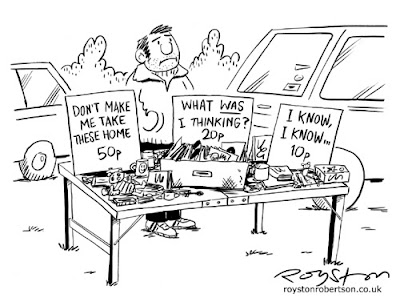 As a result of the credit crunch/economic downturn/recession, whatever you want to call it, there has been a boom in car-boot sales, apparently. This cartoon accompanies a local newspaper article on that very topic this week.

When you do on-spec cartoons for magazines, you find that you have certain favourites that you're sure will sell, but never seem to. This cartoon, which I originally drew 14 months ago (though it was redrawn for the paper, mainly to make the signs bigger and clearer) was one of those. It did the rounds.

I suppose the problem for the magazine market was that it is not a "boom boom" joke, as such, more a humorous aside about the kind of tat that people try to get rid of at boot sales. So it works better in an illustrative capacity, accompanying an article on the same subject.

The "three-sign" joke is one I've used several times. Here are two examples, from Private Eye and Reader's Digest. 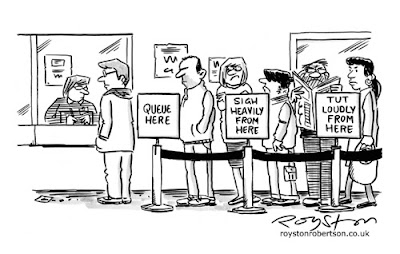 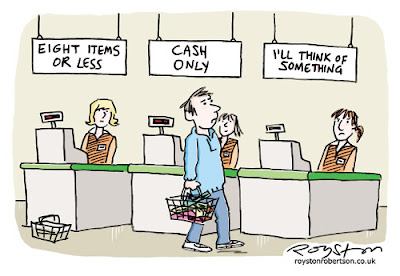 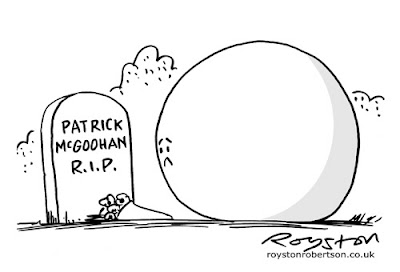 Normally, I'm not one to pass on any kind of self-help advice, it's an area that I can be a bit cynical about. But there's one piece of advice that I read a few years ago that I was reminded of again recently, and it comes from an equally cynical source, the often gloomy but always life-affirming author Kurt Vonnegut.

Here's what he said: "I urge you to please notice when you are happy, and exclaim or murmur or think at some point, 'If this isn't nice, I don't know what is.'"

It's essential advice for what are currently quite gloomy times. We need reminding that it's not all bad. And you know what? It really works. Try it. It doesn't have to be big stuff, just those little moments. But you'll find that you say it (or think it, if you prefer!) quite a lot, and those moments do stack up.

I've had a few this week. Once just sitting watching TV with my kids. "If this isn't nice, I don't know what is," said I. They ignored me, of course, and carried on watching "Horrid Henry". Another time I saw a tiny bird in the street whose skittish way of walking made me laugh. I thought the phrase this time, so no one would think I was mad.

So remember: Please notice when you are happy.
:-)

Royston's portfolio website
Labels: If this isn't nice I don't know what is, Kurt Vonnegut

Alien cartoon: One from the archives 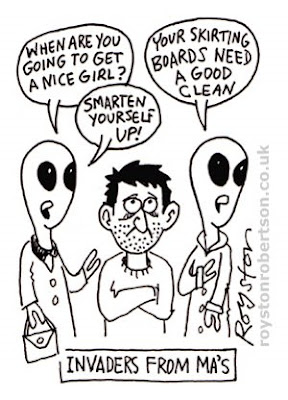 Let's take another delve into the past, with a ten-year-old cartoon. This one appeared in the Times newspaper's Metro supplement dated January 30, 1999.

It's an exceptionally silly joke. The pay-off is a dreadful pun, of course, but the image of the nagging aliens, and the things they are saying, means I just about got away with it (he said, hopefully.) "Your skirting boards need a good clean," is exactly the sort of thing my late Mum used to say.

When this appeared on an early version of my main website, I was flattered when Tony Reeve, a far more established cartoonist, referred to it as "one of the all-time great alien invasion jokes" when he linked to my site. But I can't help feeling that he was overstating the case, somehow.

Bloghorn moves. Royston not at all worried ...

The Bloghorn, for which I write cartoon-related pieces and help with proofreading etc, is moving home.

The online diary of the Professional Cartoonists Organisation can now be found at thebloghorn.org ... so if you have the blog bookmarked or subscribe to the feed you'll need to update.

There's a brand-new look for the site, as well as a new address. It's looking great, though a fellow cartoonist did point out one disturbing thing that cropped up in the "word cloud" of topics on the left: 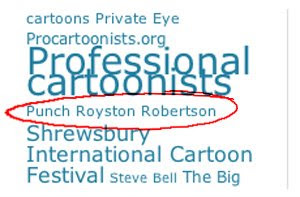 I'm assuming that I am simply being mentioned alongside a fondly remembered British humour magazine. But I'm watching my back just in case ...

Weather cartoon: Cold enough for ya? 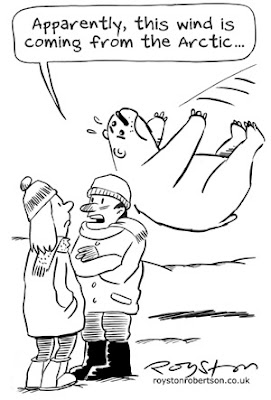 Here's a local paper cartoon for this week on the topic of it being a bit parky out. I wish the wind had been coming from the Antarctic as penguins are funnier (and easier to draw). 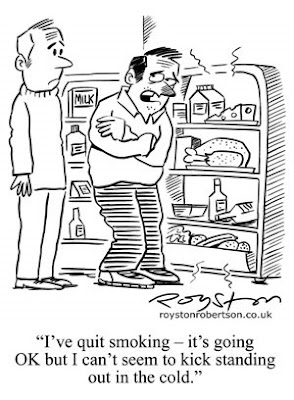 New Year's resolutions get a bad press. You often hear people say that the chances of you sticking to them are so slim that you may as well not bother. But I made one in 1997 that I'm still sticking to: to be a cartoonist.

I've dabbled in cartooning as long as I can remember, but it was at the beginning of 1997 that I decided I would draw regularly and keep posting batches of cartoons out to magazines. Within a few months I was getting published. Of course, I still had a day job and it was a few years before I became a full-time cartoonist, but it was that New Year's resolution that got the ball rolling.

I suppose the key to sticking to a resolution is to pick something positive, which that was. I'd decided I was going to do something, rather than stop doing something. Having said that, my resolution this year (there's just the one, let's not get carried away) falls into the latter camp.

Remember that Simpsons scene where Homer tells Bart to get back to the dinner table, then the voice in his head says, "What are you doing, you fool, that food could be ours!"? Yep, my resolution is to stop finishing off my kids' meals when they leave food on their plates! Five days in, I'm holding up OK. And now I've committed it to the blog I'll have to stick to it.