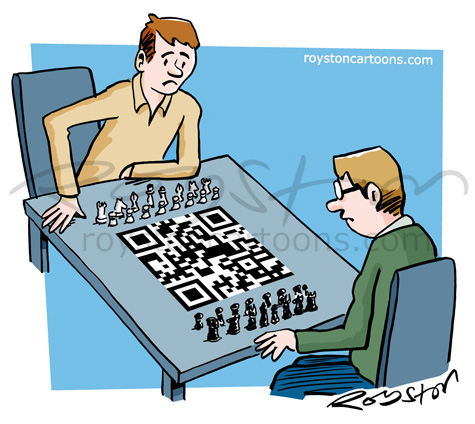 A captionless cartoon from the May issue of Reader's Digest.

Shrewsbury 2013: Doze were the days 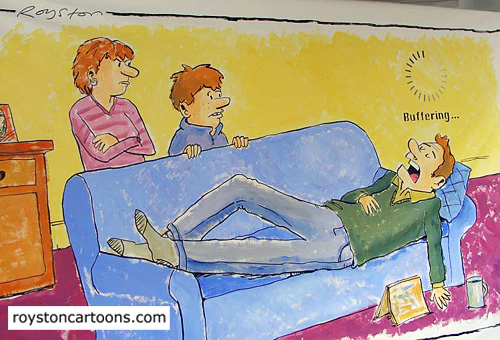 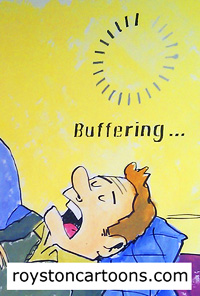 Here is my Big Board cartoon from 10th Shrewsbury Cartoon Festival, which took place at the weekend. You can see, right, that I used a homemade template, Banksy-style, to get the "Buffering" icon right. I wasn't going to risk mucking that up.

This year I went for a very loose look and had it finished in about three and a half hours. A crucial decision was to apply the acrylic paints straight after the pencilling, then ink the lines. It saves having to re-ink when you paint over lines.

What I love about the festival is getting feedback from the public, not something cartoonists usually experience. It was good to hear the recognition as I drew. Many women and children claimed that this was familiar behaviour from their husbands/fathers.

But you can't please all of the people: a different version of the "Buffering" cartoon appeared in the main festival exhibition and when I arrived at the private view somebody was trying to explain it to the Mayor. 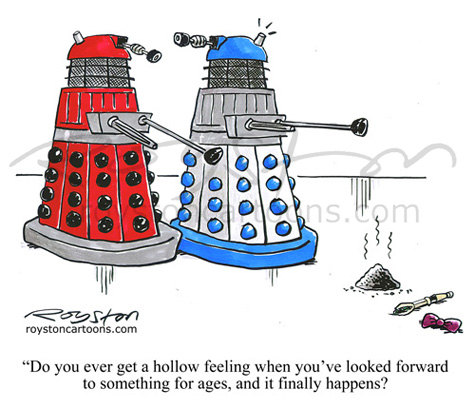 This Daleks cartoon also featured in the exhibition and was a seller. I seem to have drawn quite a lot of Daleks at Shrewsbury over the years (always a hit with the kids) and this one seemed appropriate with the festival theme of "Time" and the upcoming 50th anniversary of Doctor Who. It was also included in a feature by the BBC on ten years of the festival. The exhibition runs until May 6 then it goes on tour (details here).

Some more links: see a great short video on the festival here and a slideshow of all the boards here.

As ever, as well as the live drawing and attending of exhibitions, there was much drinking, singing and carousing. But the least said about that the better. Feel free to add a caption to this picture. 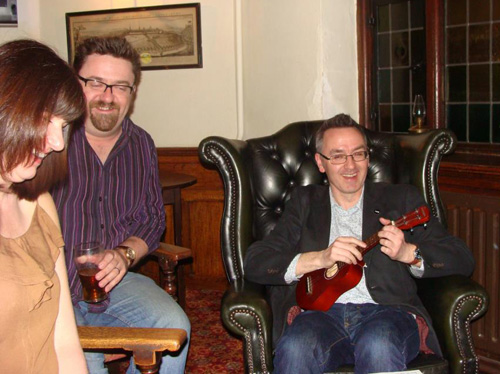 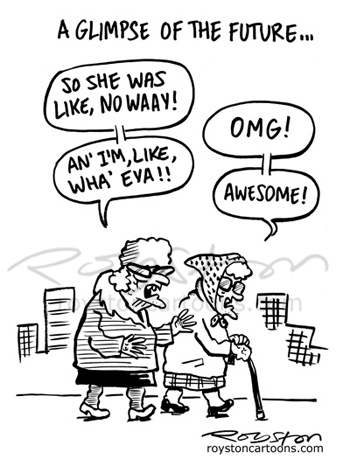 I'll be attending the annual Shrewsbury Cartoon Festival this weekend. Here's a cartoon I submitted for the main exhibition. The theme, as it is the 10th festival, is "Time".

The main days this year are Saturday and Sunday (as opposed to Friday and Saturday in the past). On those days I'll be drawing a Big Board cartoon in the market square, also I'll be contributing to the Humurals instant exhibition and drawing so-called "reverse caricatures" (someone sticks their head through a seaside-style board and you give them the body of their choice). It's possible that I might also be in the pub for some of the time.

As it's the 10th festival, I've been looking back at my blog posts about previous years. I first attended the third festival, in 2006, and have been every year since. 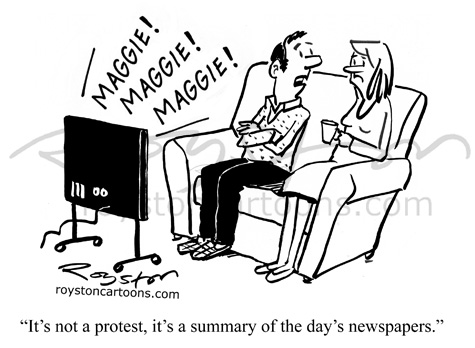 "It's not a protest, it's a summary of the day's newspapers."

This one didn't make the cut, I imagine quite a few cartoonists were chasing this particular subject. So I've put it here as it's about the seemingly endless coverage of Margaret Thatcher's death in the media and will only be relevant for a few more days – hopefully! 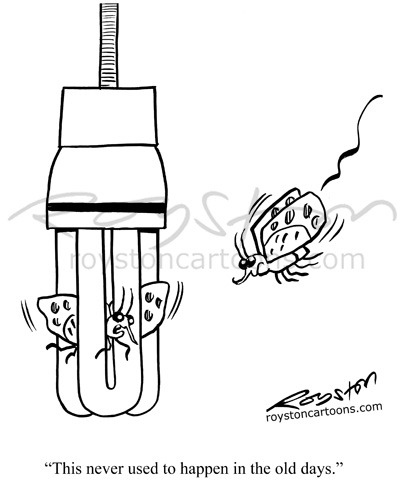 "This never used to happen in the old days."

Anyone who looks in regularly here will have noticed I've been on a bit of a blogging break. In the manner of these things that's probably known as a blogiday or something equally annoying. Anyway, here's a cartoon from last month's Saga magazine.