I wrote here a little while back about attending the Shrewsbury Cartoon Festival, and being nervous about doing one of the 6ft by 8ft "big boards" there. Well, the festival was last weekend and was terrific fun, and the board went pretty well. So my cartoon comfort zone was extended a little bit.

I was worrying too much because I was thinking of it as some huge work of art, rather than what it was: a really big cartoon! Once I looked at it like that it became less daunting. The cartoon I picked was one that was in Reader's Digest last year. I re-drew it to scale, at 6in by 8in: 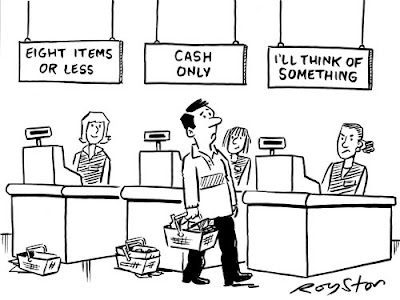 Then I added a grid of 1in squares so I could easily scale up the drawing to a grid of 1ft squares: 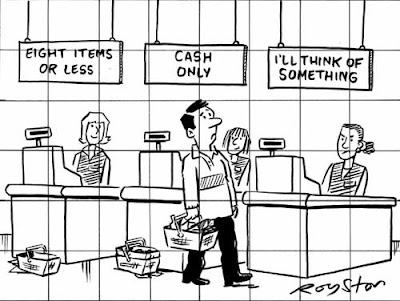 And here's the end result: 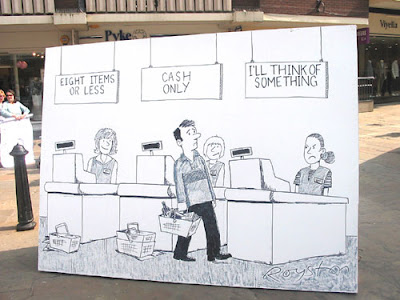 Artwork-wise, I felt that I couldn't really compete with some of the other cartoonists there – many of the best artists in the business. Some of their boards really were works of art. I'm not sure how I managed to get the lettering on the signs so off centre! Still, not bad for a first attempt. The important thing, for me, was that the cartoon got lots of laughs from members of the public. And what was particularly heartening was the number of people who said they recognised the kinds of characters and the scenario in the cartoon. Obviously that's what I was aiming at with this cartoon. I also sold the original drawing, which was a bonus!

It wasn't all work, work, work though. The festival is a key social event for cartoonists and so there was plenty of drinking, singing and scrawling cartoons on paper tablecloths. I'm the glassy-eyed fool in the checked shirt ... 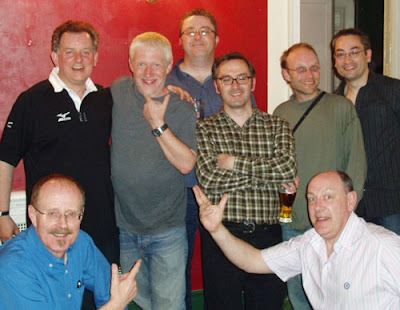 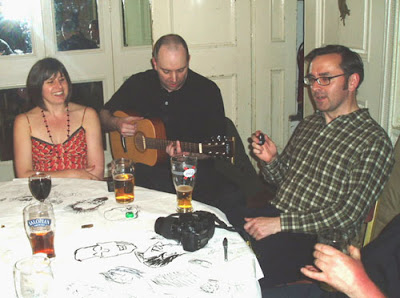 Thanks to Clive Goddard for these two pics. And thanks to the organisers of the Shrewsbury Cartoon Festival for putting on such a fantastic event.