Not Yet Sold: Ramblers cartoon "I hear there have been a few Big Cat sightings around here."

I'm kind of running out of things to say about these Not Yet Sold cartoons. No magazine has bought them – that's basically what I'm trying to say. Have then been purchased? No, they have not. Could you call these big sellers? That would be an untruth ...

My Shrewsbury Cartoon Festival in pictures 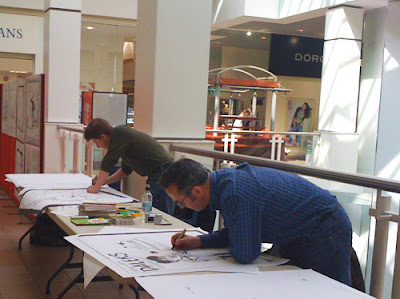 I've finally recovered from the exertions of the Shrewsbury Cartoon Festival, so here's a picture-based report on my personal experiences of the event. For a fuller report, see the stuff we posted at The Bloghorn over the weekend.

Above: this is me working on my Daleks "HuMural", as seen in the previous post. I'm going to draw a smaller version for a 10-year-old boy from Shropshire who wanted to take this home with him! 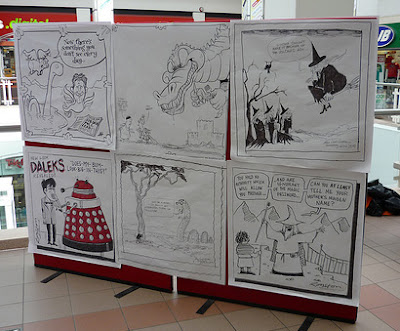 The HuMurals, all drawn in cartoon frames, were put on large boards and displayed in the Darwin Shopping Centre. 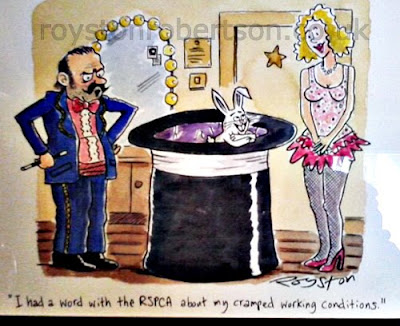 "I had a word with the RSPCA about my cramped working conditions."

Exhibitions are a key part of the festival. Here's one of my cartoons from the I Don't Believe It! exhibition, at the Bear Steps Gallery. All the cartoons are on the festival's magic, myth and mystery theme. The exhibition runs until May 8. This was photographed from the wall using a phone, hence the dodgy quality (of the picture that is, I can't comment on the joke!) 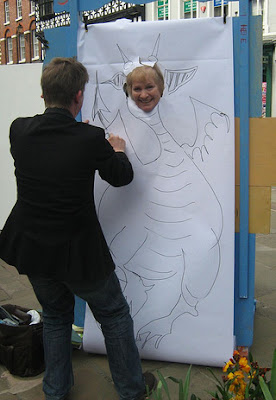 I took part in "reverse caricaturing" for the first time this year. Here's a picture I took of my colleague Matt Buck drawing festival patron Libby Purves as a dragon (well, it was St George's Day on Friday).

Working on reverse caricaturing, I was well and truly out of my comfort zone. I did it for more than an hour and there was a constant stream of children, all with a good idea of who they wanted to be: Spider-Man, Doctor Who, Cleopatra, er, "a soldier in a war" ... you name it.

It was very tiring but a good experience. You soon learn that you're unlikely to produce a masterpiece, but it doesn't matter. It's the performance of drawing that people like to see, and if you can throw in a few jokes, using props, speech bubbles, etc, you get away with it. 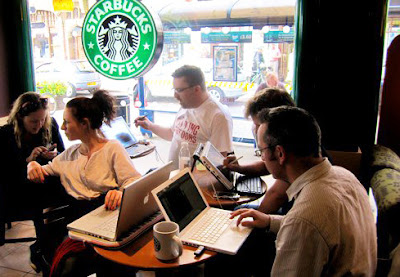 No report on the festival would be complete without a picture of us in Starbucks working on The Bloghorn. Fuelled by very strong coffee we produced a steady stream of blog posts, pictures, Tweets and video. 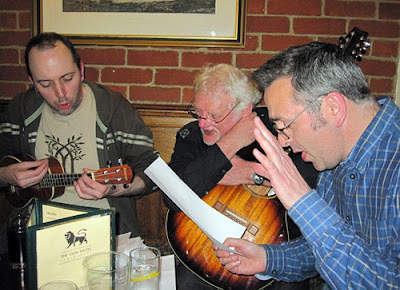 All work and no play would be very dull of course, so there was the usual amount of eating, drinking and general merry-making.

Here's me singing, accompanied by Tim Harries on ukulele. Judging by my "talk to the hand" gesture, not to mention the bemused look on Noel Ford's face, this was when we performed our unique version of Half Man Half Biscuit's Joy Division Oven Gloves on the Friday night. You had to be there. 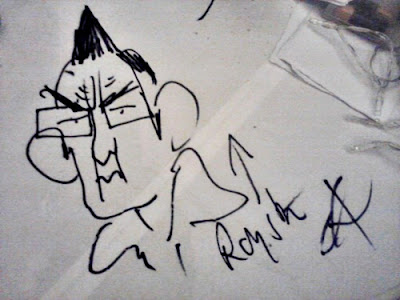 And finally, no Shrewsbury Festival is complete without the compulsory drawing on paper tablecloths after the Saturday night meal. This is me as seen by political cartoonist, and my former Eggheads team-mate, Martin Rowson. "Why has he drawn you so angry?" said everyone. "What's with the ears?" said I.

Another vintage year at Shrewsbury, then. Looking forward to 2011 already. 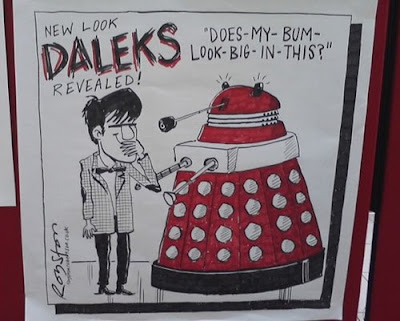 Phew! Very tired still after the Shrewsbury Cartoon Festival 2010. Will post more on it when I've caught up with work (and sleep) but in the meantime here's a cartoon I drew for the "HuMurals" in the town's Darwin Shopping Centre.

I returned home last night to find I'd got an email from a mum whose 10-year-old son was "very amused and excited" by the cartoon and drew his own version inspired by it (which she sent to me). That's kind of what the festival is all about and makes all the effort more than worthwhile.

To see the live coverage of the festival we put together while there, see The Bloghorn
Labels: Dalek, dalek cartoons, Daleks, Doctor Who, Shrewsbury International Cartoon Festival 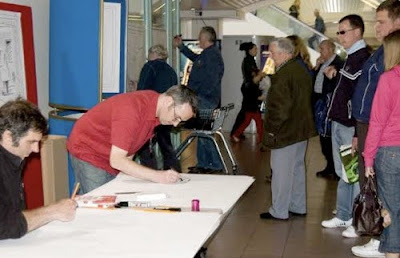 I'm off to the Shrewsbury Cartoon Festival tomorrow (events start today and run until Sunday) for lots of the usual cartoony shenanigans. Here's a pic of me drawing for some bemused passers-by at last year's festival. Photo by Gerard Whyman. 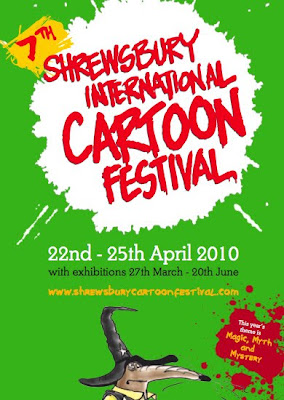 I've written a short preview of this year's festival for the Forbidden Planet blog. If I get a chance I'll post on this blog when I'm there, and add twitter.com/roystoncartoons updates, and I'll certainly report back next week.

But mostly the place to be for up-to-the-minute coverage, courtesy of myself, Matt Buck, and Alex Hughes, will be The Bloghorn and its associated Twitter feed.

And if you're going to the festival, I'll see you there for a pint of Happy Barry. Yes that's right, the Shrewsbury Cartoon Festival has its own official beer this year. Cheers! 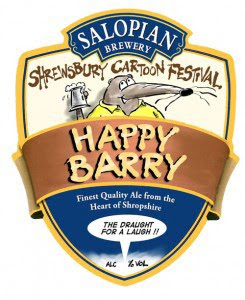 Not Yet Sold: Drinking cartoon 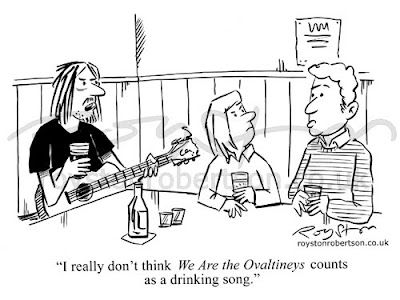 "I don't think We Are the Ovaltineys counts as a drinking song."

Here's another rejected cartoon for you. The editor of The Jester, the Cartoonists' Club newsletter, liked this one. He put it on the cover when the cartoon theme was Beer (and no, I'm not talking about my period as editor!) But paying markets? Not a sniff. 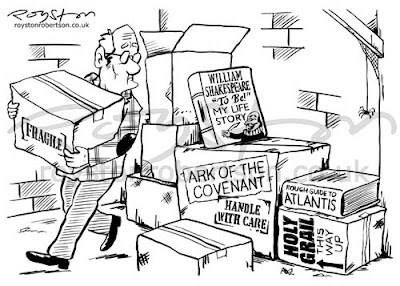 This was drawn to accompany an article about a museum which discovered lots of things in storage which they didn't know they had. Click to enlarge.

The lost autobiography by William Shakespeare makes me chuckle. I must admit to being a little pleased with myself when I decided to draw it like a modern celebrity memoir with the title "To Be! My Life Story". There are more than a few academics who would like to get their hands on that book.

One two, one two 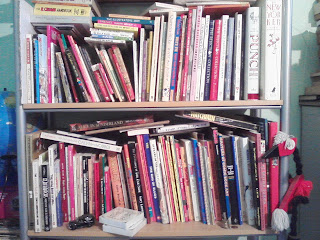 Why is this picture of a section of my bookshelves here? You may well ask. It is simply because I am attempting to see if I can send text and pictures direct to my blog via my phone. That is all. Move along ...

(Online update: Or click to enlarge if you want to have a nosey at part of my cartoon books collection. The resolution's not great but you can make out quite a few of the titles.)
Labels: cartoon books, graphic novels, magazine cartoons, mobile phones, technology 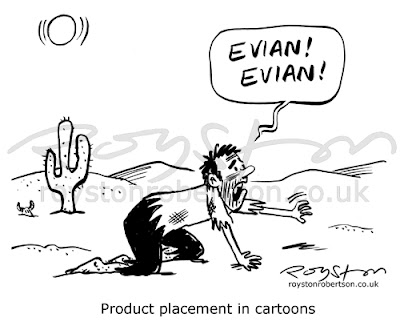 This gag is in the latest edition of the Foghorn, the magazine of the Professional Cartoonists' Organisation.

It's used as an example of my work alongside some cartoons by the other Royston and an article I wrote about finding out that there had been another cartoonist with my name (a lady Royston, it turned out). Cartoonists value their unique pen names, so I thought this would be a suitable subject for the mag.

You can read an archive of the Foghorn online, just click the button on the right-hand column of this blog (scroll down). To buy a print subscription to the mag, which comes out six times a year, go here.
Labels: advertising, magazine cartoons, media, product placement, Professional Cartoonists Organisation, The Foghorn 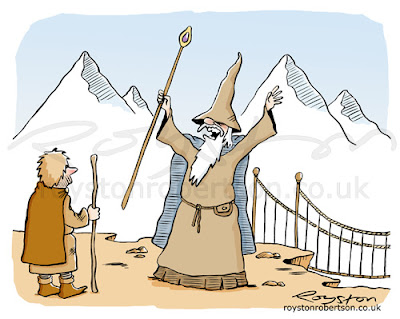 The caption options for Beat the Cartoonist are now on the Reader's Digest website: three submitted by readers, plus my original.

I won't reveal which is mine, of course, but you can probably guess that it's not the second one which has a pop at my drawing [sulks ...]

Here are the four choices.

"You hold no authority that will allow you passage, and are ignorant of the magic password. Can you at least tell me your mother's maiden name?"

"Stay back! The cartoonist's bridge isn't attached to the cliff!"

"I knew the adoption agency would come up trumps one day!"

"Go back. Health and Safety say no."

Not Yet Sold: Toilets cartoon 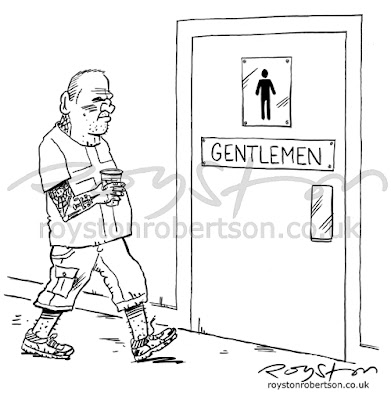 Here's a bit of toilet humour for you, as part of my series of rejected cartoons. The disconnect between the rather old-fashioned term "gentlemen" and what is often the modern reality is what I was trying to get at here. Whether it works or not, I'm not sure, given its oft-rejected status. 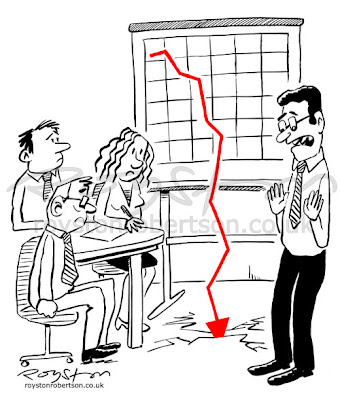 One of my clients, the financial website This is Money, asked me to provide a cartoon from my files, with wording removed, for an online caption competition. Previously they had used a stock photo.

This is different in format to the Reader's Digest caption contest (which I am in this month) as readers simply add their captions to the comments underneath the cartoon, then the site picks the best one. The prize is a copy of Avatar and a Sony Blu-ray DVD player.

It's interesting to see the captions come in (they're just over 300 at the time of writing) though it's fair to say they're a mixed bag. Also, This is Money is a Daily Mail website so many are from, er, a certain political perspective. 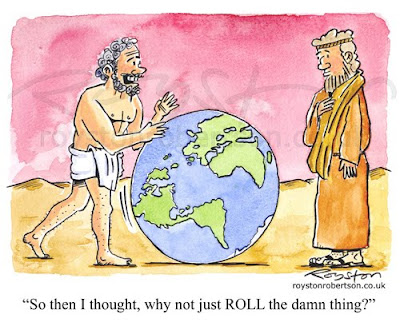 "So then I thought, why not just ROLL the damn thing?"

The countdown to the Shrewsbury International Cartoon Festival has begun. The dates for your diary are April 22-25. The theme this year is Magic, Myth and Mystery. This is one of the cartoons I submitted for exhibition.

I'll be there again this year, of course, blogging on behalf of the Professional Cartoonists Organisation for The Bloghorn, as well as drawing a few cartoons. We've been posting lots of Shrewsbury stuff on the blog, including this rather marvellous video which was shot at last year's event.

Here's an archive of my posts on the Shrewsbury Cartoon Festival

Not Yet Sold: Clown car toon 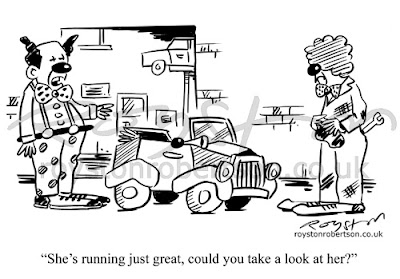 "She's running just great, could you take a look at her?"

Here's another in my series of cruelly rejected cartoons. OK, this one is just your basic "reversal" cartoon, so maybe it never stood much of a chance. But it makes me chuckle, though I think that may be more because I like the idea of a clown mechanic! As regular readers will know, I do like to draw strange, shabby looking clowns.

Prospect Cartoonist of the month “Sure, I came up with fire, and the wheel, but you’re only as good as your last idea.”

Hop over to the Prospect blog if you've got a few minutes, as I am Cartoonist of the month for April. Woo-hoo!