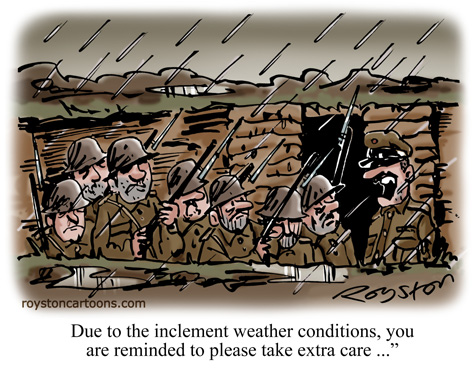 "Due to the inclement weather conditions, you are reminded to please take extra care ..."

Here's another cartoon about the First World War. It can be seen in the current issue of Prospect magazine. Unlike my recent war silhouette cartoon, this was not inspired by the centenary coverage of the war in the media, but by something far more mundane.

I was walking through a London Tube station after we had had what can only be described as a spot of light rain. The floor was slightly damp so they played the standard health and safety recorded message about "inclement weather conditions".

Like the middle-aged person I am, I thought, "And to think we won two world wars ..." From such nonsense are cartoon ideas spun ...