Graffiti cartoon: One from the files 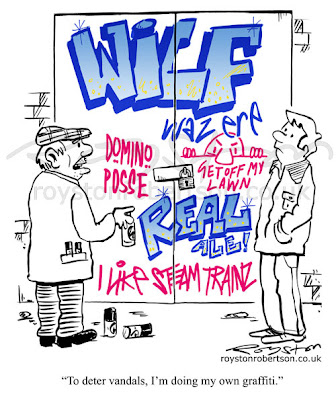 "To deter vandals, I'm doing my own graffiti."

When you do on-spec cartooning you soon build up quite a bank of gag cartoons. This means that when someone wants a cartoon on a particular subject, you can pull one from the files.

So this cartoon, which was languishing in the rejected file, was taken by a client to illustrate an article about graffiti – which was nice, as I spent a fair bit of time on the graffiti when I drew it originally!

Originally the old guy was "Alf", rather than "Wilf", as that was my Grandad's name and it strikes me as the perfect name for an old-man character. But then I thought people might take the "ALF" as standing for the Animal Liberation Front, which could confuse matters.