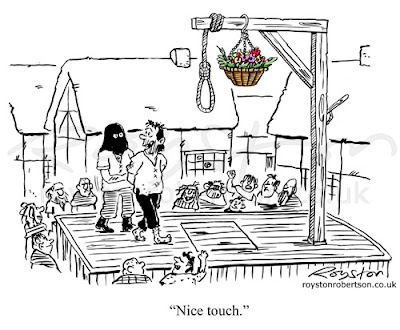 The result is in! This is from the March issue of Reader's Digest:

JANUARY'S WINNER: In a titanic battle between RD readers and cartoonist, the professional scribbler Royston Robertson won out – by just two votes. His succinct effort "Nice touch." beat off an irony-heavy challenge from Helen Martin of Gravesend, Kent: "You should have read my file. I have hayfever." Against almost a thousand entries every month, the cartoonists are manfully holding their own now, winning one in every three caption contests. SCOREBOARD: Readers 8 Cartoonists 4

As you will probably have heard, the UK edition of Reader's Digest is in administration, and they are looking for a buyer. The March issue is out now as usual though, so why not buy it to show your support? There's another cartoon by me in it, and some great gags from Huw Aaron, Rob Murray, Alexander Matthews, Steve Way, Peter "Pak" King, and Simon Meyrick-Jones.

And you can have a go at the next Beat the Cartoonist, which is drawn by my cartooning pal Wilbur Dawbarn.