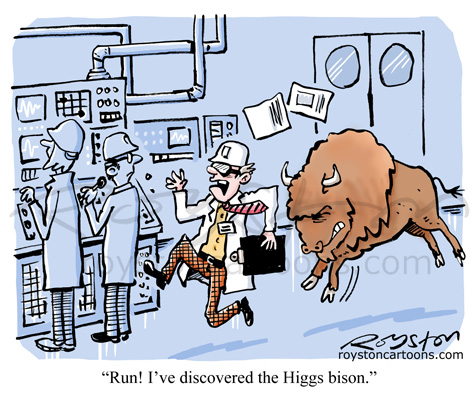 I make no apologies for the groan-worthy pun in this cartoon. Why should I? It's not my fault if cartoon editors pick puns over all the other eruditely witty and bitingly satirical cartoons that I submit ...

Actually the passage of this cartoon into the August (and indeed august**) Prospect magazine may have been smoothed by the fact that it features a piece about the Large Hadron Collider at Cern where they're trying to find this Higgs boson wotsit. I didn't know that when I sent the cartoon in, it was a happy coincidence.

I was quite pleased with the drawing, which I think is fun. Hopefully it makes up for the pun -- for which, two paragraphs later, I am still wholly unrepentant.

*That's a bonus groaner that features alongside the cartoon on the website.
**Sorry, I've just read Stephen Fry's autobiography.