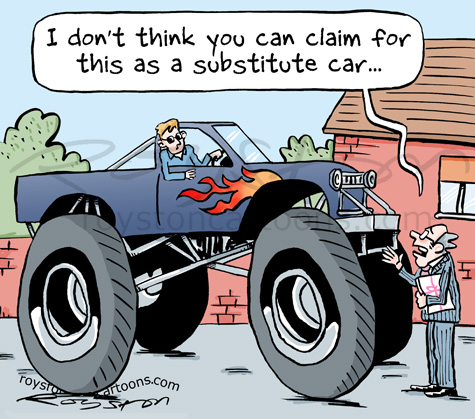 Drawing cartoons for trade and business magazines inevitably means you do a lot of office-based cartoons. That's fine -- particularly as office cartoons often allow for re-use sales later on -- but occasionally it's nice to let rip with something a bit more extravagant, and I think this one is certainly that.

It was drawn for a law magazine to illustrate an article about claiming for vehicles rather than accepting a courtesy car from an insurer. Apparently some people get a bit carried away in their choice of vehicle, so I thought a monster truck would fit the bill.

I'm not usually a fan of drawing vehicles, but Google image search was my friend here. I can't be certain, but I think I may even have emitted a few "vroom-vroom" noises while drawing this.