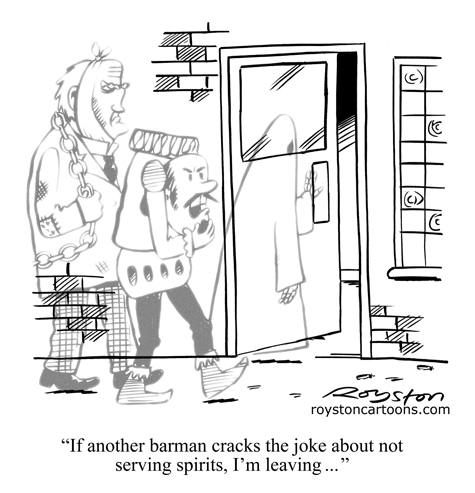 "If another barman cracks the joke about not serving spirits, I'm leaving ..."

This cartoon is from Isle, a magazine for the Thanet area, where I live. It accompanied a feature about a team of "ghostbusters" who seek out supernatural goings on in supposedly haunted old pubs.

As an experiment, I drew the characters on a separate layer to the background and used a filter in Photoshop to give them a ghostly look. Can't remember what the filter was. Ghostify, probably. I was pleased with the result, but sadly it didn't come out quite as well in print! You can see the ghosts but they are a bit more faded than they appear here. Ah well, at least it means you have to search for them, a bit like "real" ghosts.