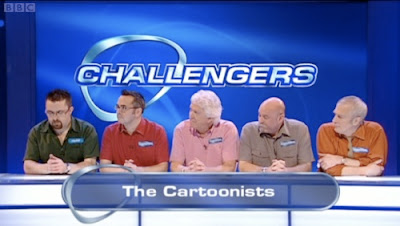 If you have yet to watch the show on BBC iPlayer and don't want to know the result, look away now: yay we WON!!!

And pretty convincingly too, becoming the first team to knock out each Egghead in the head-to-head rounds and then go on to win the show. Kevin Ashman, the last Egghead standing, who finally fell on a question about cartoons, if you can believe it, said it was "the most comprehensive defeat we've ever had". I like that quote.

To celebrate here's a rare shot of me smiling on the show (most of the time my face was in a grimace caused by sheer nerves!) 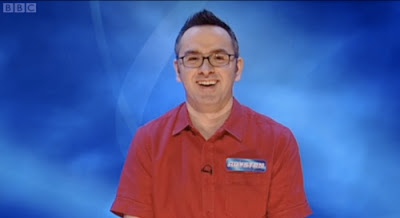 We all drew cartoons and caricatures of the Eggheads beforehand, which we revealed on the show. I drew CJ de Mooi as a Bond villain as that is the type of "Mr Nasty" character he likes to project! He got the joke, luckily, and really liked it. I only found out via a recent episode of Eggheads that he considers himself something of an expert on Bond films, so that was fortuitous. 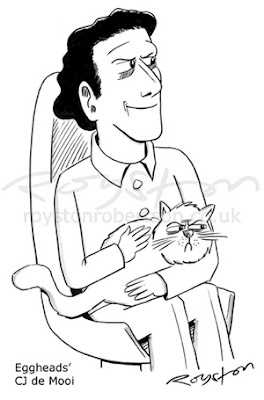 Over at the Bloghorn there's another more detailed account of the Eggheads experience by team captain Alex Hughes: Cartoonists crack Eggheads Can I just say "Yay!" one more time?