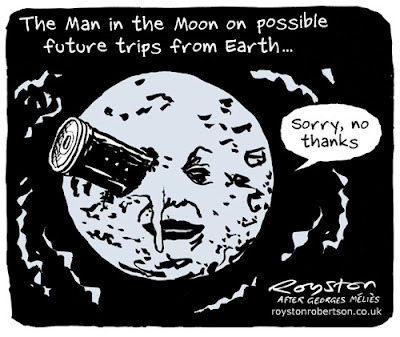 Once again, this week I have taken part in the "reverse caption" competition at the Cartoonists' Club public forum . The caption was "Sorry, no thanks" and I found it a bit tricky. But I've only myself to blame as I set the caption, having won last week.

This one is a bit different to the usual gag cartoons I do, but it was fun to draw. And it was another chance to do a topical one. It just occurred to me, when the story about crashing spacecraft into the moon broke yesterday, that it's all a bit reminiscent of the famous Georges Méliès silent film Voyage to the Moon.

"Sorry, no thanks" is a phrase familiar to all cartoonists, by the way, as it is often what is written on rejection slips!

Here's the cartoon I won with last week, the caption was "Right, any more of that and you'll be sitting on the naughty step." Click to enlarge. 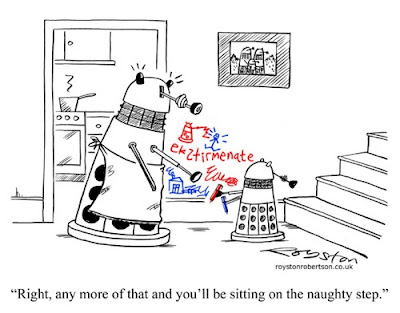 To me, the word "step" instantly meant Dalek joke opportunity! I'm always a sucker for a Dalek cartoon.

This next one, from a few weeks earlier, was less successful in the voting. I was surprised as I quite liked it. It was drawn for the caption "This is the best I could come up with" and I include it here as Antony Gormley's living artwork One and Another, which it spoofs, finishes next Wednesday (October 14). 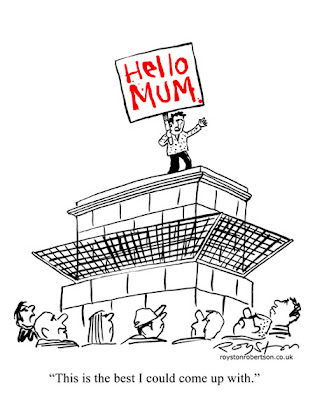