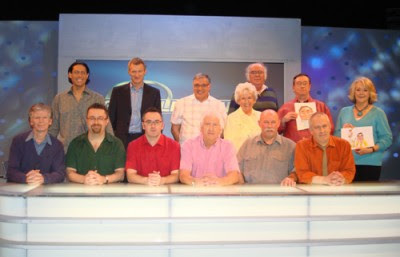 OK, I said I'd remind you nearer the time: I can be seen on the TV quiz show Eggheads tomorrow (October 29th) at 6pm on BBC Two.

I'll be appearing with a group of fellow cartoonists from the PCO. Our team is called, logically enough, The Cartoonists. It was that or something naff like "Drawn to Quizzing"!

The Cartoonists, seated left to right, are: Chris Burke, who was on the subs' bench but will not be seen on the show, Alex Hughes, myself, Robert Duncan, Graham Fowell and Martin Rowson.

I would say wish us luck, but of course I already know how we did! The show was recorded on January 29th, which means it will have had a gestation period of nine months to the day.