Going into Battle once more 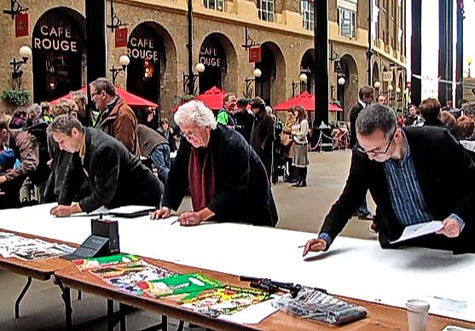 This Sunday I'll be taking part in the Battle of the Cartoonists at the launch of The Big Draw at the V&A in London at 2pm.

I took part, on the Procartoonists.org team, in 2008, at St Pancras International, and in 2010, above, at the Hays Galleria. I had planned to sit this one out but at the last minute another team was needed so Reader's Digest was asked to form one and I was asked if I wanted to take part.

The full list of teams is: Private Eye, Reader's Digest, The Sun, The Telegraph, The Guardian/Observer, Big Girls Drawers and Procartoonists.org. The seven teams will be tasked with coming up a comic response to seven cartoons (the non-funny kind) by Raphael. And we don't know which one we'll get until minutes before we start!

See the full list of cartoonists taking part here. To see more about the launch, which this year is called Big Draw, Big Make and runs from 11am-5pm, go here and download the programme. Come along and, er, nod approvingly ... apparently there's no clapping or cheering allowed in the Raphael Room!