Art cartoon: Stealing from the Masters 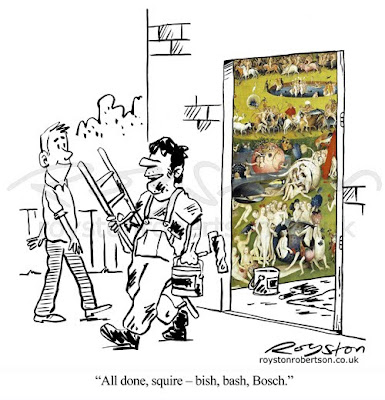 This is one many art cartoons I've drawn over the years, in an attempt to make myself look clever. It's one of two gags by me that can be seen in the December edition of Reader's Digest.

Often with art cartoons I'll draw an approximation of the original, as I did with this Picasso cartoon and this Magritte one, but here it seemed as though using the original would work better for the joke, as the decorator character is supposed to have painted it ... and would be a lot less work!

You can see the full painting, The Garden of Earthly Delights (1503-4) by Hieronymus Bosch, in some detail here. It's almost like a bizarre cartoon itself, in all its wacky glory. I didn't put the usual "Apologies to ..." on this one as, well, it would have given the punchline away.