10 pun-based jokes every cartoonist has done 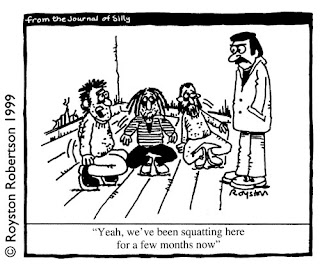 "Yeah, we've been squatting here for a few months now."

This joke, from ten years ago, is clearly a "play on words" gag. I used to do a lot of puns and word-play gags back then. I do fewer of them now, though if I think of one that seems original I'll still run with it.

The problem with puns, you see, is that if you've thought of it, there's a very good chance someone else has too. So, I present ...

10 pun-based jokes every* gag cartoonist has come up with

(*Well, every UK cartoonist at least. And yes, of course I include myself in all of these.)

For less common but still fairly popular jokes, see also NHS Very Direct, cats "landing on their feet", Gulliver's travellers cheques etc etc. If you've got any more, add them in Comments below.

The squatting cartoon appeared in Modern English Teacher magazine in 1999. The editor had seen it in the Journal of Silly, hence the strapline at the top. They did pay me for re-using it though, unlike JoS which was a small-press mag chock full of gags and offered only exposure. Normally such offers are best avoided but the JoS was quite widely seen and was great for those of us who were starting out at the time.