Interviewed by Your Thanet newspaper 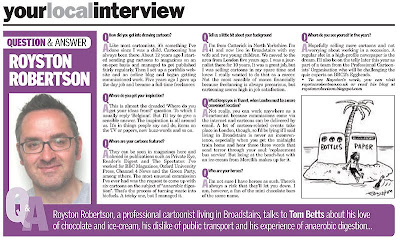 One of our local papers, Your Thanet, has an interview with me today. Tom Betts from the paper sent me a bunch of questions via email. As I expected, it had to be edited a bit, because they also used one of my cartoons. (I thought an interview with a cartoonist without a cartoon would be a bit rubbish.)

So, in case you're interested, here's the full version:

How did you get into drawing cartoons?
Like most cartoonists, it’s something I’ve done since I was a child. Cartooning has always been there. I created strips for school magazines, I drew poster caricatures for student elections at college and so on. About 12 years ago I started sending gag cartoons to magazines on an on-spec basis and managed to get published fairly regularly. Then I set up a portfolio website (roystonrobertsonco.uk) and a blog (roystonrobertson.blogspot.com) and began getting commissioned work. Five years ago I gave up the day job and became a full-time freelancer.

Where do you get your inspiration?
This is almost the dreaded “where do you get your ideas from?” question. To which I usually reply, “Belgium”. But as you made the effort and used the word “inspiration”, I’ll try to give a sensible answer. The inspiration is all around us, I find. It’s in things people say and do, items on the TV, in the papers, new phrases and buzz-words, and so on.

Who do you work for and where do your cartoons feature?
My cartoons can be seen in magazines here and abroad such as Private Eye, Reader’s Digest and The Spectator. That’s the on-spec side of the job where you send out batches of cartoons and keep your fingers crossed. Then there’s the commissioned work, where people approach you to draw cartoons for books, trade mags, websites, adverts, you name it. I have worked for BBC Magazines, Oxford University Press, Channel 4 News and the Green Party, among many others. The most unusual commission I’ve ever had was the request to come up with six cartoons on the subject of “anaerobic digestion”. That’s the process of turning waste into bio-fuels. A tricky one, but I managed it.

Tell us a little bit about your background.
I’m originally from Catterick, North Yorkshire. I’m 41 and now live in Broadstairs with my wife and two young children. We moved to the area from London a little over five years ago. I was a journalist for ten years, starting out as a reporter for local papers in northeast London and ending up as a sub-editor at The Times. It was a great job, but I was drawing and selling cartoons in my spare time and knew that I really wanted to do that as a career. Not the most sensible of moves financially, because life as a freelance is always precarious, but cartooning scores high in job satisfaction.

What keeps you in Thanet, when London must be a more convenient location?
Not really, you can work anywhere as a cartoonist because commissions come via the internet and finished cartoons can be delivered by email. A lot of cartoon-related events, gallery openings and so on, take place in London, so I’d be lying if I said that living in Broadstairs is never an inconvenience, especially when you get the midnight train home and you hear those three words that send terror through your soul: Replacement Bus Service. But spending time at the beach hut and the occasional ice-cream in Morelli’s makes up for it.

Who are your heroes?
I’m not sure I have “heroes” as such. There’s always a risk that they’ll let you down. I am, however, a fan of the mini chocolate bars of the same name. Especially the Crunchies.

Where do you see yourself in five years?
Hopefully doing the same thing but selling more cartoons and not worrying about working through a recession. A regular slot in a high-profile newspaper or magazine is the dream, really. In the short term, I will be seeing myself on the telly later this year: I’m part of a team from the Professional Cartoonists’ Organisation who can be seen challenging the quiz experts on BBC2’s Eggheads.

If you had one wish for Thanet what would it be?
Faster, cheaper rail links would be nice. And fewer replacement buses.
Labels: freelance cartoonist, magazine cartoons, Royston Robertson, Your Thanet
Newer Post Older Post Home