Music cartoon: Another from the archives 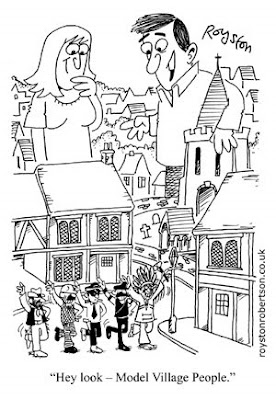 Time for another delve into the archives. This one was published ten years ago on this very day, in the New Statesman magazine.

It's quite a detailed cartoon and I remember being pleased with the way it looked when reduced to fit a single column. Like most of my early cartoons though, it looks a bit clunky to me now ... particularly those fat-fingered hands. I was clearly also experimenting with different signatures, this one's overly ornate.

This is from before I had web access, so I would not have done any picture research to get the Village People right. A Google search now reveals that they're one short: Military Guy has gone AWOL.

The New Statesman still uses cartoonists, but sadly they no longer take on-spec stuff. I had quite a few published in there in the late 1990s/early 2000s. And while it is obviously an intelligent, serious, political magazine, they didn't always go for "clever" gags. Often they'd take ones that were very silly, like this one, or even a bit rude.

Shortly before this, they published a gag of mine that featured a couple in bed. The bloke is looking smug and the woman is wide-eyed, saying "I can't believe it, Jake. To think I actually thought it was an extra leg." I'd have said that was a shoo-in for Fiesta, perhaps, but no, it was in the New Statesman.