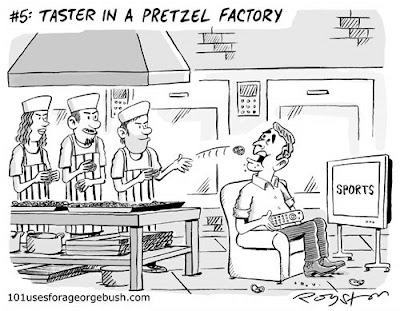 This cartoon was drawn for the blog 101 Uses for a George Bush, which was set up by the cartoonist Jon Kudelka.

Jon Kudelka is inviting cartoonists to help him get 101 "uses" drawn before Dubya hands over the reins of the presidency to Barack Obama on January 20.

"In the spirit of international goodwill and co-operation that George has fostered over the long years, it’s only fair that the cartoonists to whom he’s given so generously give something back," says Jon.

I decided to do a cartoon based on one of the funnier moments of the Bush presidency: Pretzelgate. If only it had all been such a barrel of laughs.