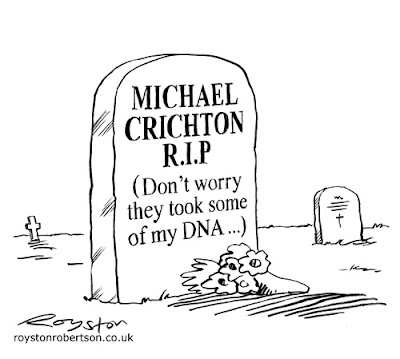 No cartoon goes off faster, if you'll excuse the distasteful analogy, than a cartoon about the death of someone famous. By that I mean, if you don't sell it straight away, its moment is gone. You can't tout it around all the magazines.

This one did not sell. Luckily a gag like this is quick to draw! But it made me chuckle so I'm posting it here. I like the idea of the Jurassic Park author turning up one day and saying, "Told you so".

And his death happened in the week that scientists said they may be able to clone a woolly mammoth. As Jeff Goldblum says: "They were so busy working out whether they could, they forgot to ask whether they should." Or something like that.