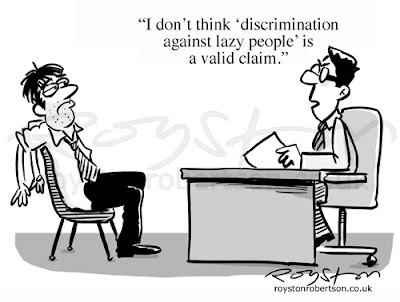 "I don't think 'discrimination against lazy people' is a valid claim"

Time for another in my occasional series of cartoons that predict the future. And I think this must be the best one yet.

The evidence, above, is a cartoon from a careers textbook on the subject of job interviews from 2007. It accompanies a chapter called Equal Opportunities Issues. Ha ha, look, I made a ridiculous joke! That could never happen!

Fast forward to 2010 and we have a news story which broke this week: The word "reliable" in a Jobcentre advert was removed as it "may discriminate against the unreliable".

I'm beginning to think I should work for a think tank as a "futuroligist". Check out my previous posts in this area: