More cartoons from the other Royston 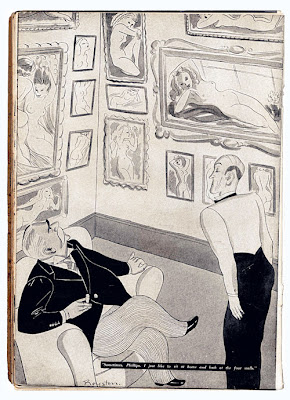 "Sometimes, Phillips, I just like to sit at home and look at the four walls."

I managed to get round to scanning a few cartoons by the other Royston, the pseudonym of Victoria Cowdroy, who worked as a cartoonist in Australia in the 1940s.

I posted her excellent Disney cartoon a few weeks ago, and here are three more. Like all the cartons from the 1941 Man annual, they're full-pagers, hence the captions appear small here. Click to enlarge.

They're mostly in a "saucy" style, as above, though the one below appears to be making a comment on bankers, who were clearly held in as high esteem then as they are now. 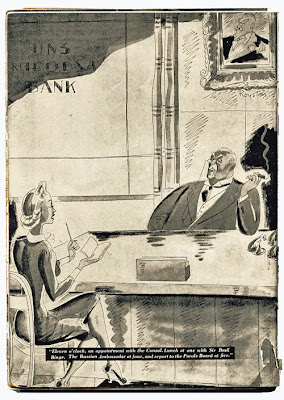 "Eleven o'clock, an appointment with the Consul. Lunch at one with Sir Basil Binge. The Russian Ambassador at four, and report to the Parole Board at five."

This one, though is definitely in a more saucy vein. It's pretty racy stuff, as this couple have clearly been up to something naughty. The look on the face of the patient is brilliant, although, slightly disconcertingly, he does look rather a lot like Ronald Reagan. 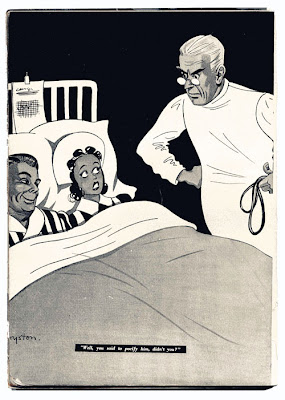 The bad crop, which turns Royston into "oyston", is the fault of the publishers, by the way, not my scanning. Thanks again to Denise Miles for sending me the book.