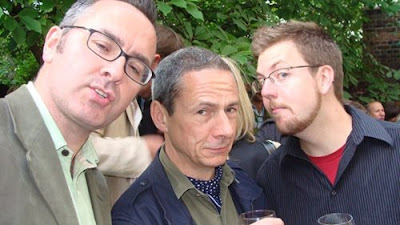 Occasionally I put down my pens, get on a train to London and socialise with other cartoonists. And a right good laugh we invariably have as well. Here's me pictured last week at Prospect magazine's annual summer party, with fellow scribblers Paul Lowe and new boy Rob Murray.

I think my dazed expression is the result of the flash from the camera wielded by another cartoonist, Clive Goddard, and not, as you may think, the effect of too much free wine.

The party was held in the garden behind Prospect's office in Bloomsbury. As is usual on these occasions, I spent most of the time chatting to other cartoonists, and so I failed do any "networking". Darn. There was lots of celeb spotting to be done though, mainly of the Guardian reader/Newsnight viewer variety ("Ooo look there's Martha Kearney!" etc.)

Of course, being invited to a magazine's party is no guarantee that your cartoons will appear regularly in it, and in fact I've not been seen in those pages since February. But they're very nice people who give booze and canapés to cartoonists, so I'll let them off.

Here's the first cartoon of mine that Prospect published, from way back in October 2004. 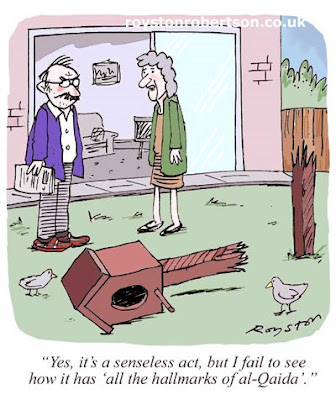 "Yes, it's a senseless act, but I fail to see how it has 'all the hallmarks of al-Qaida'."