My cartoonist friend Alex Matthews tells me that he has been trying for ages to get a talking-object cartoon published in a magazine. And he's finally succeeded, with a cartoon featuring a talking stagalmite (or is it a stalactite?) in Prospect magazine. You can see it on his new blog.

This got me thinking because I've really not done a great deal of talking-object cartoons. I've done plenty with talking animals, but not your actual inanimate everyday objects. And, really, you don't see that many around, unless they're by the master of the technique: the New Yorker's Charles Barsotti. He's given life to many an lifeless object. A great talking pasta gag springs to mind.

Anyway, I looked through my files and could only find one published example, and it's almost ten years old. This was published in 1999 in the now defunct Metro supplement which came with the The Times on a Saturday. 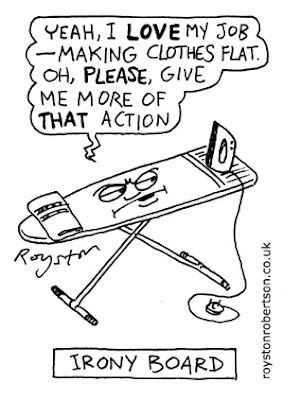 I've always had a fondness for this one, probably because it's so very, very daft, and I never thought anyone would actually print it! I like the world-weary look on the ironing board's, er, face.

Looking through my unpublished gags, I found I've done maybe three or four others but none I want to share here because one is quite recent and is still "doing the rounds" of the magazines, and the others are, well, not that great. OK ... I have no shame, here's one. Talking punctuation marks, anyone? 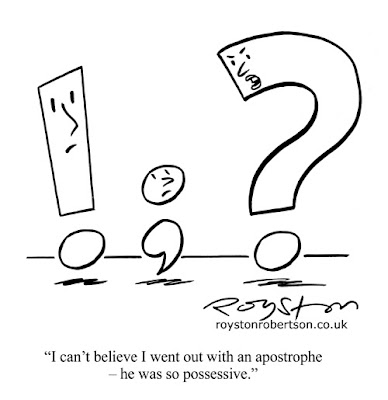 Actually I rewrote this cartoon for a commissioned job. It became one of several cartoons illustrating an in-house style book (a guide to grammar usage etc.), but the rewritten line came from the mouth of a human.

It was an interesting exercise to look through my talking-object gags because what I realised was this: in every one of them the technique is used to illustrate a pun! So maybe a little thinking outside the box is in order and I need to find other ways of utilising this little-used cartoon technique. But I don't think Mr Barsotti will be too worried just yet.

If you have any links to great talking-object cartoons that I may have missed, let me know.