Chav debate: Cartoonists don't have to be nice 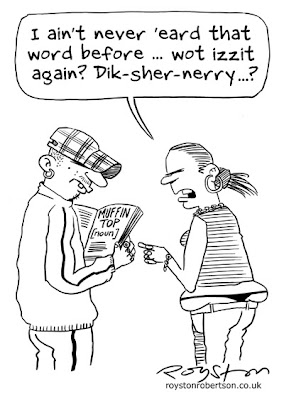 Here's a cartoon I drew last week to illustrate an article about new words in the Oxford English Dictionary, including slang phrases such as "muffin top". For those who don't know what that means, well I hope it's obvious from the cartoon.

As you can see, I have depicted characters that you might, in the current British parlance, describe as chavs. I sometimes do this in cartoons as a shorthand for a loutish or yobbish person. The Burberry baseball cap and sportswear usually does it.

But should I be doing this or does it merely show that I am a middle-class snob with a deep level of hatred towards the working class? That's what the Fabian Society would say. Last month the think tank said that the word chav should be banned.

I thought about this at the time, and can kind of see what they're getting at, they're worried about people being demonised. But isn't it patronising and insulting to imply that chav equals working class?

I guess I have to admit to being middle class because I went to university, read The Guardian, and have a passing acquaintance with sun-dried tomatoes, but my upbringing was working class and I know, possibly unlike the Fabian Society, that there are all kinds of working class people, many with no interest in designer sportsgear and hanging out at bus shelters.

It was left to Simon Donald, co-creator of Viz, to be the voice of reason when he pointed out that the word chav is meant to be a term of abuse. He has a point, it's like saying that the word idiot should be banned as it is offensive to idiots.

But the real question is: should I as a cartoonist even concern myself with the debate? Cartoonists don't have to be nice. Cartoons are meant to provoke and offend on occasion. That's why when Viz launched it was the funniest comedy around in any medium, because unlike the comedians on the TV and the radio they weren't constantly worrying about offending certain sections of society.

I'm not advocating a return to the days when racist and sexist humour was dominant, merely suggesting that we don't need to be concerned at all times about who gets upset by jokes and cartoons. Lampooning louts and idiots goes back to the days of Hogarth, so Burberry baseball caps won't be disappearing from my cartoons any time soon.

Anyway, on balance I probably do more jokes about the middle classes (see the Reader's Digest and Private Eye cartoons below). Everyone is fair game.