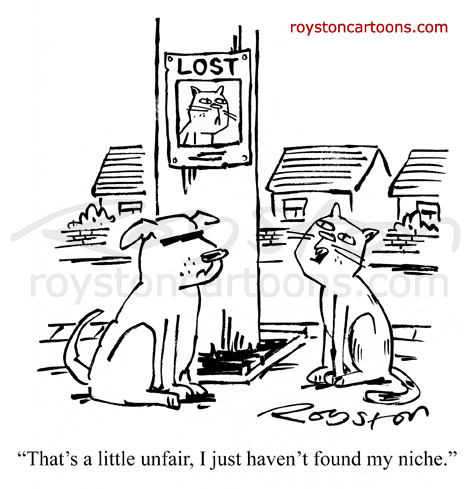 "That's a little unfair, I just haven't found my niche."

I've got a couple of cartoons in the current Private Eye, here's one of them.

It's a reworking of a gag I sent round a few years ago which was rejected. The original drawing was a similar set-up but the cat looked depressed and said "I wouldn't say I was lost, it's more of a disaffected malaise".  I think I did another version where he spoke of "ennui". It's more than possible that I was over-thinking the joke.

While re-working it I removed the repeated use of the word "lost" in the caption and decided that making the cat look depressed was over-egging the joke. These were both crucial to making it all work, I think. Cartoons often need a little fine-tuning to get them right.