The cartoon that keeps on giving 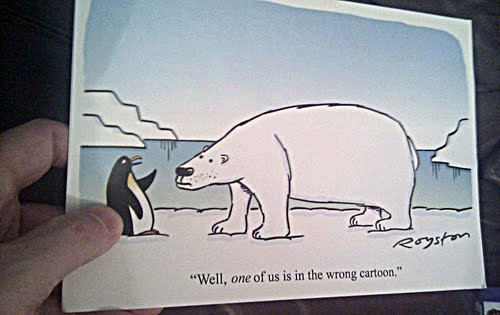 I've got three cartoons in the exhibition Animal Crackers, which opens at the Cartoon Museum in London today. Go see it if you're in the city this summer, it's funnier than the Olympic Games.

I was chuffed that my penguin and polar bear cartoon was used on the invitation to the private view, above, which I attended last night. For a cartoon that I had zero expectation for when I drew it in 2006, it seems to have taken on a life of its own.

It was originally in Reader's Digest, then it went on an expedition to the Antarctic, and later was used on a fundraising T-shirt for a bipolar disorder charity. I've also used it myself as a business card, a Christmas card and it gave me the idea to do a Pengiun Books spoof for the cover of my book of cartoons.

And throughout its many incarnations, I continue to hear of some people saying they don't get it. Which is fine, you can't please all the people all the time. I myself don't know the answer to one question: which one is in the wrong cartoon?

Footnote: The Animal Crackers exhibition is divided into themed sections. This one is in the Polar Opposites section where I was pleased, and a little humbled, to see it alongside this masterful piece by Mike Williams.
Labels: Animal Crackers, Antarctic, cartoon exhibitions, Cartoon Museum, magazine cartoons, penguin, polar bear, Reader's Digest
Newer Post Older Post Home