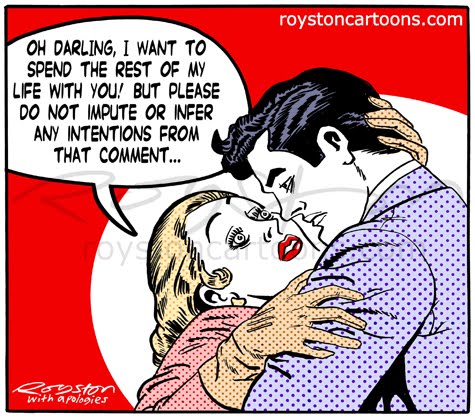 This cartoon, which pastiches the work of the pop artist Roy Lichtenstein, which was itself a pastiche of comic art, recently accompanied an article in a law magazine.

It was about the legal problems involved in separations with "cohabitant" couples. The difficulty appeared to be trying to establish what the parties' intentions had been, as there was no marriage contract, and the fine legal definition as to whether these were inferred or imputed ...

Yes, I was lost too! But I think I got enough of a gist of the topic to come up with the right cartoon. A law firm has just bought a colour print of it, so I suppose I must have.