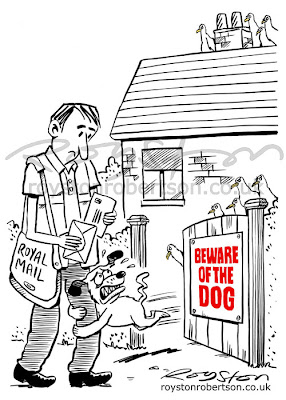 There, I've said it. I don't understand why birds such as ravens and crows are depicted in films as the personification of evil when clearly it should be seagulls.

Holding this view is a little unfortunate though, as I live in a seaside town. (Although, it should be pointed out that I did not hold this view before I moved to the seaside town.)

Part of the problem is that I work in a converted attic so I am mere feet away from the noisy blighters. Having a nest on the roof doesn't help. The chicks' cries are almost as annoying and twice as persistent.

Anyway, when a local paper asked for a cartoon to go with a story about seagulls terrorising residents, attacking them as they leave their homes and so on, I could relate.

Here's more moaning about seagulls, but with a rather nice photo.