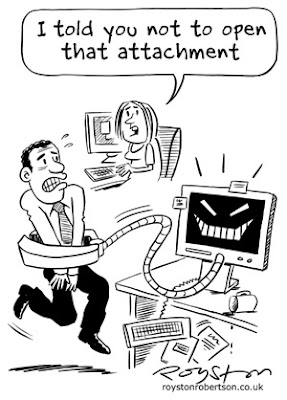 "I told you not to open that attachment."

I was recently commissioned to draw a series of cartoons to illustrate an organisation's staff handbook. Here's one of them, it accompanies the section on computers.

The joke here was originally used in a gag cartoon which I sent out as part of an on-spec batch to all the usual magazines. It did not sell, but I always thought it was a fun joke, so I was glad to give it an airing (and get paid for it, of course) in a different context.

Rejected cartoons, or the jokes within them, will often get used somewhere other than the newsstand magazines, so the time spent on them is rarely wasted.