I took part in The Big Draw at Covent Garden at the weekend. The Big Draw is an annual, nationwide campaign to get people enthusiastic about all kinds of drawing. 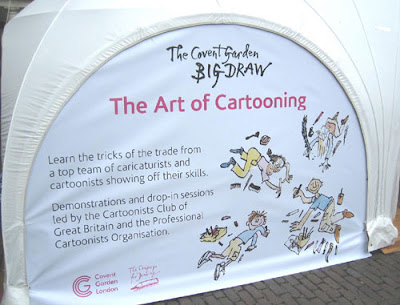 A marquee was set aside specifically for cartooning. There were workshops on strips, caricatures etc. with cartoonists on hand to offer tips, advice and encouragement to those taking part. 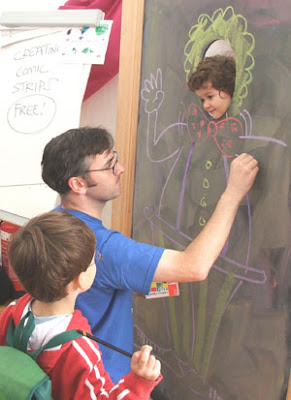 Here's me doing a spot of “reverse caricaturing” (Thanks to John Stilgoe for the pic.) This is where people put their faces through a board, like the ones you see at the seaside, except it’s blank and the participants say what kind of body they’d like. Very popular with the kids: lots of fairies, pirates, princesses, animals and a couple of Bart Simpsons. I probably had to draw a few too many girls as butterflies than was strictly necessary. All good fun though. The whole event reminded you of how much people love cartoons – grown-ups as well as kids. I hope there were some art editors from magazines and newspapers taking note!

Like last year, there was a Battle of the Cartoonists, where four teams competed to produce a banner on the theme of “High Life, Low Life”. Again there were teams from Private Eye, The Guardian and The Independent, plus this year there was a team from the new Professional Cartoonists’ Organisation. The banners were put to the public vote, with those clever clogs from The Guardian, led by Steve Bell, winning again. There's more on the Battle at the PCO Blog

There are Big Draw events throughout the UK right now. See their website for details.